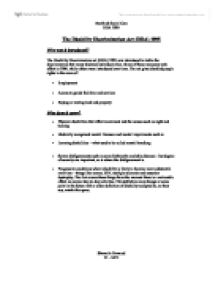 The Disability Discrimination Act (DDA) 1995 Why was it introduced? The Disability Discrimination act (DDA) 1995 was introduced to tackle the discrimination that many disabled individuals face. Some of these measures took effect in 1996, while others were introduced over time. The act gives disabled people rights in the areas of: * Employment * Access to goods facilities and services * Buying or renting land and property Who does it cover? * Physical disabilities that affect movement and the senses such as sight and hearing * Medically recognised mental illnesses and mental impairments such as * Learning disabilities - what used to be called mental handicap. ...read more.

This definition may change at some point in the future with a wider definition of disability accepted so, as they say, watch this space. Problems within the DDA Some of the problems with the DDA include: 1) Under the DDA 1995, HIV/AIDS falls within the category of progressive conditions, but at the moment the act only covers progressive conditions when a person displays symptoms of the disease. A person living with HIV and with no symptoms is not protected under the DDA 1995. But we know from experience that you don't have to be sick to be discriminated against for being HIV positive. ...read more.

The DDA 1995 does not currently apply to small employers, only to businesses with more than 15 employees. The Act also excludes some professional activities from its scope, most of them falling under the "Government's thumb" (statutory office-holders, members of the Ministry of Defense, the British Transport Police, Royal Parks Constabulary, the United Kingdom Atomic Energy Authority Constabulary, prison officers, fire fighters, and members of the naval, military or air forces of the Crown). The DDA 1995 also does not apply to qualifying bodies, barristers and advocates, partners and volunteers. 5) The scope of protection under the DDA 1995 does not cover constructive dismissals and does not make it unlawful for employers to instruct or pressurize other people to discriminate. Health & Social Care DDA 1995 Shamaila Dawood IT - MT5 ...read more.