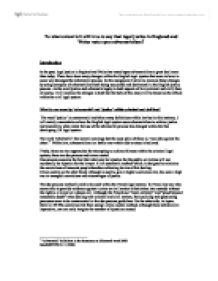 To what extent is it still true to say that legal justice in England and Wales rests upon adversarialism?

To what extent is it still true to say that legal justice in England and Wales rests upon adversarialism? Introduction In the past, legal justice in England and Wales has rested upon adversarialism a great deal more than today. There have been many changes within the English legal system that seem to have in some way damaged the adversarial process. In this assignment I strive to examine these changes by using examples of adversarialism both being successful and detrimental to the English justice process. As the word justice and adversarial apply to both aspects of law (criminal and civil) then, of course, I will mention the changes in both but the bulk of this essay will be based on the effects within the civil legal system. What do we mean by 'adversarial' and 'justice' within criminal and civil law? The word 'justice' is controversial and takes many definitions within law but in this instance, I will mainly concentrate on how the English legal system uses adversarialism to achieve justice and research to what extent the use of the adversarial process has changed within the fast developing UK legal system. The word 'adversarial' has several meanings but the most plain of these is, "one side against the other."1 Within law, adversarialism is a battle over which side or story is believed. Firstly, there are two approaches for attempting to achieve fairness within the criminal legal system; these are due process and crime control. ...read more.

With the establishment of the county courts in 1846 came a means by which businessmen could recover damages without investing all their time and hard earned money. Towards the latter part of the last century the original Woolf reforms were reestablished but this time they were done so with the intent to increase the work of both the superior and county courts. Already the older trend of using an adversarial approach was slipping away into more modern times. At the beginning of the 20th century there was evidence of more complaints about delays in the civil courts and the ever increasing financial status of litigation. In his report, Lord Woolf estimated that in the 20th century alone there had been approximately 60 different reports concerning the attempt to reform the civil justice system. One of Woolf's arguments was for a 'root' and 'branch'3 review which would lead to a fundamental change within the system unlike many other proposals which had barely affected the civil process. Lord Woolf's Reforms 1995 In the interim report on 'Access to Justice,' Lord Woolf described the problems within the civil justice system as being "interrelated" and "restricted to one particular area".4 Lord Woolf illustrates the new civil system as being based upon 'aggressive adversarialism.' Woolf suggested the following reforms (which seem to have no regard for the adversarial process that has been used for so long) ...read more.

The most significant achievements have been introducing alternative dispute resolutions and also the pre-action protocols9 which, have made it possible to move those cases that can not be settled in these ways through the legal system quickly and effectively. On the other hand there are negative points to Lord Woolf's reforms such as his reform for fixed costs through the fast track reform, which unfortunately did not prove viable. The biggest change that proved fundamental was within the legal aid system which changed to conditional fee arrangements. This means that in personal injury claims, defendants are now liable for the success fees as well as the costs of the claimant's insurance. Conclusion From all the research I have done and from the evidence I have gathered it is my conclusion that although in the past the legal justice system in England and Wales did rest upon adversarialism, since the Woolf reforms and over the last century adversarialism has become a thing of the past and is no longer heavily relied on. As with everything in life the fast changing times bring with them serious changes, even within the most complex legal system. The adversarial approach has by no means been completely erased but new, improved methods of litigation are now being applied and seem to be creating equality and fairness within both the criminal and civil justice system. I have no doubt that within the next century there will be even more reforms and change, and maybe even the total abolishment of adversarialism. Reference list * http://www.dca.gov.uk/middle/report. ...read more.