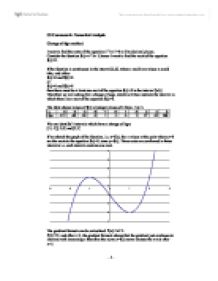 I want to find the roots of the equation x3-3x-1=0 to five decimal places.

If the function is continuous in the interval [a,b], where a and b are values x could take, and either:

The table shows values of f(x) at integer values of x from -5 to 5.

We can identify 3 intervals which have a change of sign:

If we sketch the graph of the function, i.e. y=f(x), the x values at the point where y=0 are the roots to the equation f(x)=0, since y=f(x). Three roots are confirmed in these intervals i.e. each interval contains one root. 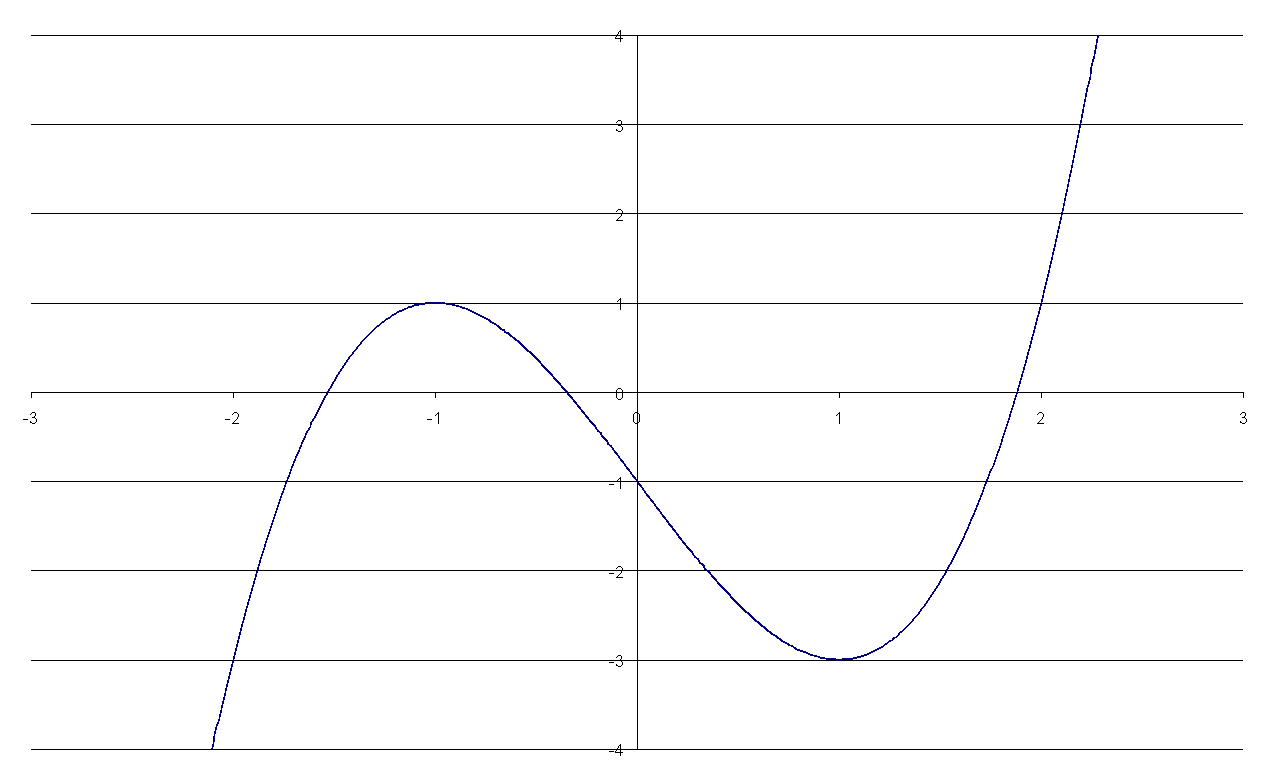 The gradient formula can be calculated: f′(x)=3x2-3

f′(5)=72, and after x=5, the gradient formula shows that the gradient just continues to increase with increasing x therefore the curve y=f(x) never crosses the x-axis after x=5.

f′(-5)=72, and for any x value lower than x=-5, the gradient formula shows that the gradient just continues to increase with decreasing x, therefore the curve y=f(x) never crosses the x-axis before x=-5.

Therefore there are no roots of the equation f(x)

As one can see, x1 which equals 2, is more accurate than x2 which equals four. The root the iteration converges to is 2.8951065. This occurs because the absolute value of the gradient formed at the curve is very small, i.e. it is very shallow, therefore the tangent touches the x-axis further away. However, this method still works because the tangent formed at (2,-10) leads the iteration to (4,0), allowing tangent sliding from the right side of the curve, which brings us back to a similar situation.

I can confirm earlier that I had found the roots using this method to seven decimal places. I had claimed that the roots to the equation x3-7x-4=0 are:

An example of a failure of this method is as follows: 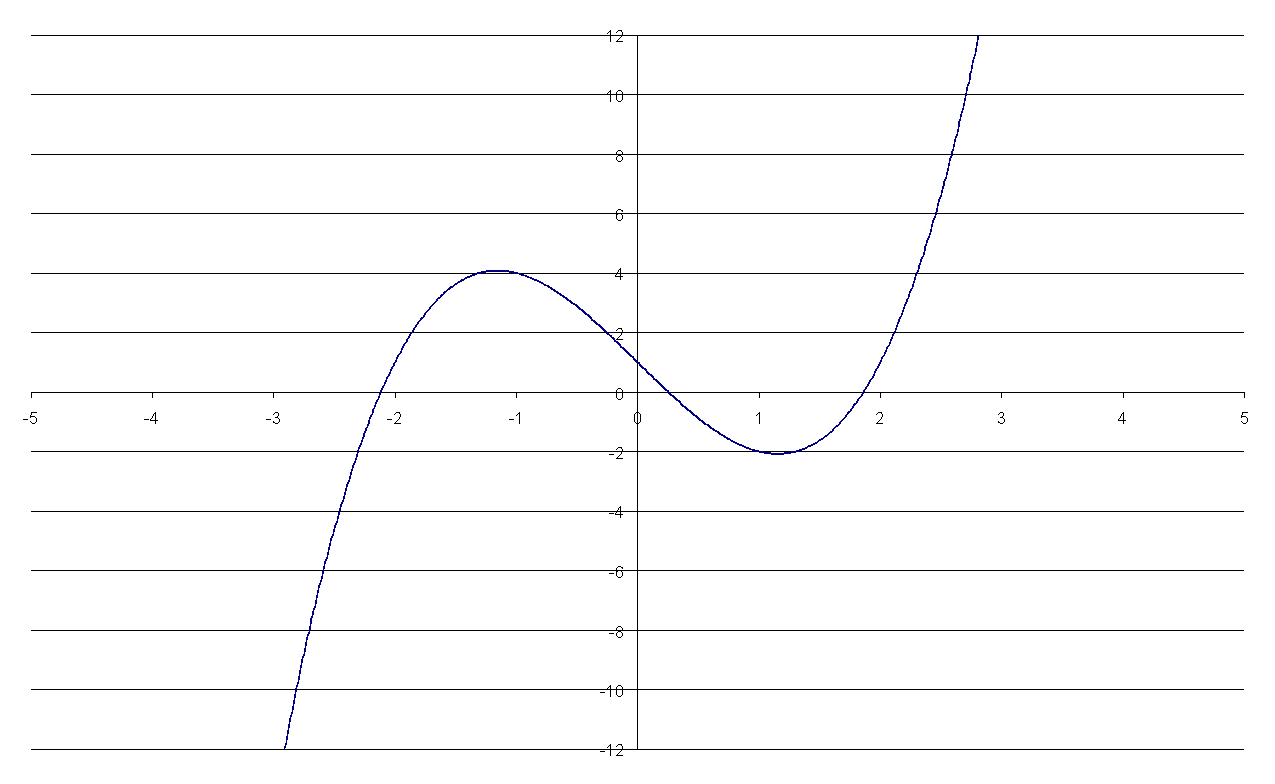 I want to find the root of the equation in the interval [0,1]. 1 is a decent first approximation, as it is closer to the root near 0, than the root at 2.

However if one uses 1 in the iteration the following occurs:

i.e. it does not converge at the required root.

To illustrate this graphically (the pink line represents the iteration): 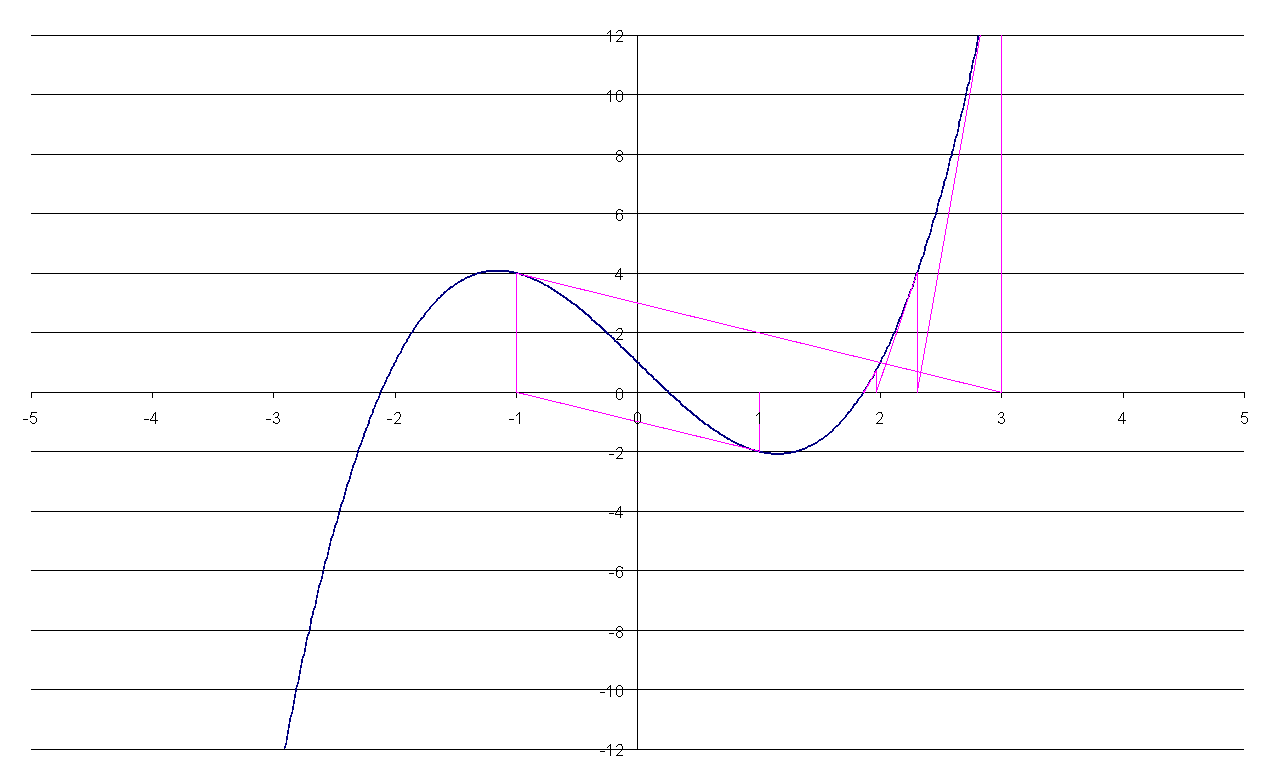 This happens because the gradient of the curve at x=1 is very shallow, therefore the tangent touches the x-axis ‘too far’ to the left. The gradient is shallow at this value for x as well, therefore the new tangent touches the x-axis ‘too far’ to the right, causing convergence at the root furthest to the right (the root with the biggest value), 2.8951065. Therefore the method fails to find the particular root I wanted it to find despite taking a starting value close to it.

I want to find the roots of the equation x3-3x+1=0 to seven decimal places.

One way to rearrange this equation is:

Therefore one possible iteration that emerges from the original equation is: 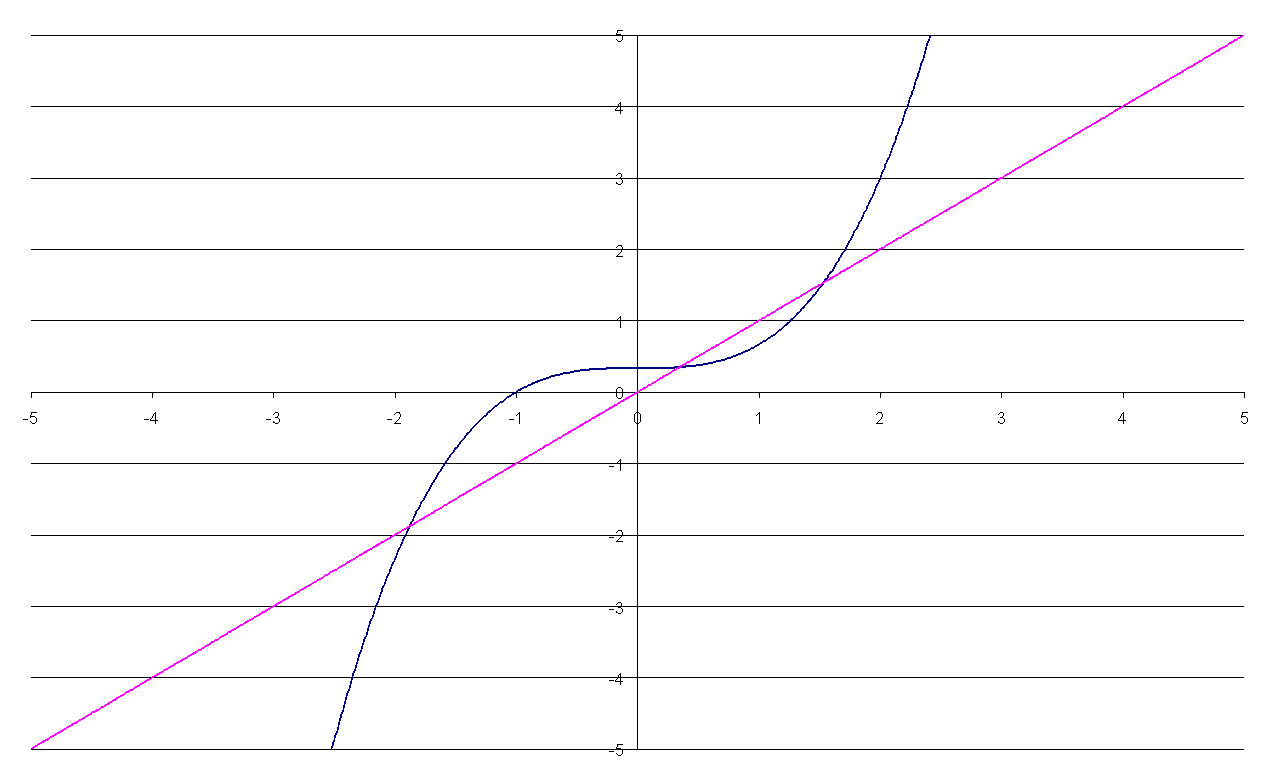 The points at which these two curves meet have the same x-values as the roots to the equation x3-3x+1=0.

therefore, x3-3x+1 = 0, which is the equation to which the roots we are trying to find.

Therefore the roots of the equation have the same x-values as these intersection points.

Using the formula generated at the beginning,

I used Microsoft Excel to do all of these tables and graphs. In terms of ease of use, the rearrangement method required the least steps as all I had to do was fill the formula in one cell, using cell above as the xn value, and ‘drag down’. This was the quickest and easiest method to produce a table for. The Newton-Raphson method was much the same, however it required the input of a much longer formula, and therefore was slightly more tedious. The decimal search method required the input of a lot of data, even after entering the formula into one of the cells. It requires n+1 tables if I want to find a root to n decimal places. Therefore this was by far the slowest method to use.

In terms of failure, the rearrangement method only gives one root for one rearrangement. In this respect the Newton-Raphson method is better, since it converges to all roots given a suitable starting value. However it has the potential to diverge which is unhelpful. In this respect, the decimal search method is the best, given small enough intervals, as it hardly ever fails once a root is identified in a particular interval.