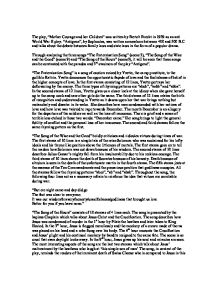 A comparison of three songs of Brecht's &quot;Mother Courage and her Children&quot; with the parados and 3rd stasimon of Sophocles' &quot;Antigone&quot;

The play, "Mother Courage and her Children" was written by Bertolt Brecht in 1939 as an anti World War II play. "Antigone", by Sophocles, was written somewhere between 400 and 500 B.C and talks about the debate between family laws and state laws in the form of a popular drama. Through analyzing the three songs "The Fraternisation Song" (scene 3), "The Song of the Wise and the Good" (scene 9) and "The Song of the Hours" (scene3), it will be seen that these songs can be contrasted with the parados and 3rd stasimon of the play "Antigone". "The Fraternisation Song" is a song of caution voiced by Yvette, the camp prostitute, to the gullible Kattrin. Yvette denounces the opportunistic fa�ade of love and the foolishness of belief in the higher concepts of love. In the first stanza consisting of 12 lines, Yvette portrays her deflowering by the enemy. The three types of rhyming patterns are "abcb", "aabb" and "abba". In the second stanza of 12 lines, Yvette gives us a closer look at the idiocy when she gave herself up to the camp cook and saw other girls do the same. ...read more.

"The Song of the Hours" consists of 10 stanzas of 4 lines each. The song is presented by the hapless Chaplain which talks about Jesus Christ and the Crucification. The song describes how Jesus was condemned of murder in the 1st hour by Pilate the heathen and later taken to King Hesiod. In the 3rd hour, Jesus is flogged mercilessly and the mockery of a crown made of thorns was placed on his head and a robe flung over his body. The 6th hour recounts the Crucification and Jesus' plight and his continual mockery by bandits resigned to the same fate. The scene is so cruel that even daylight looks away. In the 9th hour, Jesus gives up his soul and miracles are seen. The most interesting aspects of the song are the last two stanzas which talk about Jesus' maltreatment by the heathens who laugh at 'this simple son of man' The song, in context of the play, reminds the readers of the imminent death of Swiss Cheese who is compared to Jesus in this regard. It tells us that war reveals all the blood and gore and the ugliness of society and any semblance towards beauty is mutilated. ...read more.

The concentration of the parados is on war itself whereas the songs examine lateral themes as a consequence of war. The other point to note is the fact that there is a sight of victory and virtues like forgetfulness are broached and seen with optimism. The songs shun notions of victory and virtue. The 3rd stasimon condemns the idea of love as an unpardonable emotion which drives men to recklessness. However the contrast is seen when love is feared and given a godlike stature whereas the songs treat any semblance to virtue like dirt. Love is, clearly, laughed at. Moreover the objects of criticism are not similar as love does not entirely constitute a virtue. There is an underlying similarity seen in the 3rd stasimon and "The Song of the Wise and the Good". Virtues and love drive men and women to commit recklessness which sentence their existence to the doldrums consequently. Yvette and Antigone are clear examples. In the 3rd stasimon, love as a flaw is the object of focus whereas in the songs the idiotic behaviour is brought to light. Both the 3rd stasimon and the songs look at criticism; however the songs view the object with ridicule whereas the 3rd stasimon criticizes with unconditional reverence. ...read more.