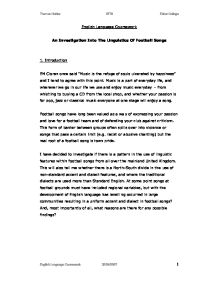 An Investigation Into The Linguistics Of Football Songs

English Language Coursework An Investigation Into The Linguistics Of Football Songs 1. Introduction EM Cioran once said "Music is the refuge of souls ulcerated by happiness" and I tend to agree with this point. Music is a part of everyday life, and wherever we go in our life we use and enjoy music everyday - from whistling to buying a CD from the local shop, and whether your passion is for pop, jazz or classical music everyone at one stage will enjoy a song. Football songs have long been valued as a way of expressing your passion and love for a football team and of defending your club against criticism. This form of banter between groups often spills over into violence or songs that pass a certain limit (e.g. r****t or abusive chanting) but the real root of a football song is town pride. I have decided to investigate if there is a pattern in the use of linguistic features within football songs from all over the mainland United Kingdom. This will also tell me whether there is a North-South divide in the use of non-standard accent and dialect features, and where the traditional dialects are used more than Standard English. At some point songs at football grounds must have included regional variables, but with the development of English language has levelling occurred in large communities resulting in a uniform accent and dialect in football songs? And, most importantly of all, what reasons are there for any possible findings? 2. Description of data For my data I will be using printouts of football song lyrics from a selection of football clubs across the British Isles. In many cases the songs are traditional chants from urbanised communities with industrial backgrounds but also modern communities that don't have the same industrial background because they are fairly young. Where possible, the data includes the data of origin and the title/author of the story, as this may provide helpful information on the background of the song. ...read more.

The same is said about the word 'gannin' from the Newcastle club song, as the word going in Standard English has been changed in the dialect to the Geordie word 'Ganning' and pronounced 'gannin'. Because of the fact that football songs are spoken songs only, the use of non-standard accent features does not surprise me. Accent is all about how the word is pronounced. Pronunciation can be changed in football songs to accommodate any rhyming and for the regional accent (such as gannin' in Newcastle). Map 2 shows that the non-standard accent features do not follow a conclusive trend, as the features are spread out in clusters of one or two only. Only Newcastle and London breaks this trend. The significant 8 features found in the Southern to Northern teams two songs sparks the theory that in the South the usage is wider spread, while in the North the usage is consumed 2/3rds by Newcastle United (just one team). The 8 features found in the Southern to Northern teams two songs is possibly because the traditional rivalry of South to North is 'mocked' by southerners, where the fans taunt Northern fans with the word 'proper' ironically with its connotations with an Estuary English background. It was only Newcastle in the North that surpassed 3 incidences, with its surprisingly high 7 non-standard features. This suggests that their accent is still highly operative and reflects the same picture from London. I can compile these results into a table: Region Av Use of n-std accent features per club song Scotland 0.75 examples North 2.4 examples Midlands 0.75 examples South 2.4 examples Table 2: Av Use Of Non-Standard Accent Features Non-regional songs from England and Southern to Northern teams show an average of 4.0 examples. This is because the sole amount of examples I found were from the Southern to Northern teams two songs. The overall statistics show that 54% of the 28 non-standard accent features were from the North. ...read more.

A substantial North-South divide does not exist, because, as the results show, the North uses more non-standard accent features but the South uses more non-standard dialect features. The situation I have identified closely resembles the current picture in the United Kingdom for the word 'plimsolls' (see map 1C), where isoglosses drawn for that word closely resemble isoglosses drawn for the non-standard features (see map 2 and 2B). 7. Evaluation I was able to make a clear aim due to the high standard of data that I collected. I decided on looking at two aspects, one at the non-standard features from around the country, then at an aspect of non-regional songs. This would give me a clear indication of the picture from regional and non-regional football songs. I had a major problem in that some of the data I collected had been written/transcribed in Standard English and therefore non-standard features had been omitted. This was particularly noticeable in Liverpool, where no non-standard features were found. Surprisingly, really, because the scouse accent is one of the most stereotyped accents in the UK. This is in contrast to QPR, where the features were left in. A solution to this could be to rewrite the song 'how a local might say it' but this is highly inaccurate. I didn't manage to find a way of finding the origin of a tune/data or the year because on some songs it wasn't available. This meant I couldn't use the age of the song in my conclusion (for instance, an older song will have less colloquialisms than a young song). I predicted in my aims that there would be a close comparison to the current accent and dialect feature in the UK, which did happen. I also predicted that there would be a substantial divide, and while there was a slight divide, it is not substantial enough to accumulate a theory. Overall I feel that my investigation was a success, but I would like to have had some more unique data in some parts of the UK, and possibly an informal accent survey to compare to. 8. ...read more.