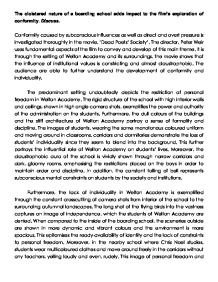 The cloistered nature of a boarding school adds impact to the film's exploration of conformity. Discuss. Conformity caused by subconscious influences as well as direct and overt pressure is investigated thoroughly in the movie, 'Dead Poets' Society'. The director, Peter Weir uses fundamental aspects of the film to convey and develop of this main theme. It is through the setting of Welton Academy and its surroundings, the movie shows that the influence of institutional values is constricting and almost claustrophobic. The audience are able to further understand the development of conformity and individuality. The predominant setting undoubtedly depicts the restriction of personal freedom in Welton Academy. The rigid structure of the school with high interior walls and ceilings, shown in high angle camera shots, exemplifies the power and authority of the administration on the students. Furthermore, the dull colours of the buildings and the stiff architecture of Welton Academy portray a sense of formality and discipline. The images of students, wearing the same monotonous coloured uniform and moving around in classrooms, corridors and dormitories demonstrate the loss of students' individuality since they seem to blend into the background. ...read more.

This image of personal freedom and individuality is clearly depicted while conformity is prevalent in Welton Academy. The contrasting images of the natural environment and the students of the boarding school, who are within the restriction of administration, accentuate the immense influence of conformity in Welton Academy. Therefore, Peter Weir shows the constraints in personal liberty of students in Welton Academy through various kinds of visual techniques However, Peter Weir also uses audio to illustrate this main theme: conformity versus nonconformity. The first music the audience hears, when the movie is introduced, is the traditional sound of bagpipes, emphasising how the school enshrines traditional values, which is sometimes seen as restricting. When entering the classroom, John Keating whistles 1812 Overture by Tchaikovsky, who was an eminent Russian composer of Romantic era. Furthermore, "Joyful, Joyful We Adore Thee" in Beethoven's 9th Symphony is played during the soccer game, in which the students exalt and praise John Keating. However, during other times such as in class rooms and corridors, no music is heard except for the loud boisterous voices of the authoritarian teachers. ...read more.

This further allows them to express themselves that would never be accepted within the rigid discipline and tradition of the Welton Academy. The eerie atmosphere developed in the film, created by the smoke and the isolation of this dark cave, suggests that these actions of the boys are somehow forbidden. This also symbolises that this is the start of the fight for personal freedom and individuality, which will challenge the constricting values of Welton Academy, because "it is not too late to seek a new world". Moreover, the images of dark silhouettes hurrying across the landscape at night give an impression of some monks escaping into the nature from a monastery. This clearly illustrates that conformity is stringently upheld in the boarding school. Peter Weir skilfully establishes the restrictive role of the institution's values through the repeated shots of cloistered environment as well as the constricted composition of the Welton Academy. The contrast between conformity and nonconformity is demonstrated through the vivid images of autumnal scenes and the claustrophobic aura of the boarding school's interior. Thus the movie, "Dead Poets' Society" clearly encapsulates conformity through many audio-visual techniques. ...read more.