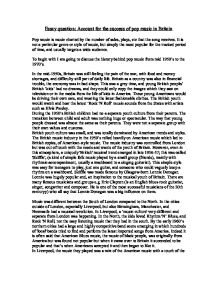 Account for the success of pop music in Britain

Essay question: Account for the success of pop music in Britain Pop music is music charted by the number of sales, plays, etc that the song receives. It is not a particular genre or style of music, but simply the most popular for the tracked period of time, and usually targets a wide audience. To begin with I am going to discuss the history behind pop music from mid 1950's to the 1970's. In the mid-1950s, Britain was still feeling the pain of the war, with food and money shortages, and difficulty still part of daily life. Britain as a country was also in financial trouble, the economy was in bad shape. This was a grey time, and young British people/ British 'kids' had no dreams, and they could only copy the images which they saw on television or in the media from the life of kids in America. These young Americans would be driving their own cars, and wearing the latest fashionable clothes. The British youth would watch and hear the latest 'Rock 'N Roll' music sounds from the States with artists such as Elvis Presley. During the 1950's British children had no a separate youth culture from their parents. The transition between child and adult was nothing huge or spectacular. The way that young people dressed was almost the same as their parents. ...read more.

Britain succeeded largely when the US president John F. Kennedy was assassinated and it left America in a state of shock, without a sense of direction and vulnerable. The Americans looked to England for musical and artistic inspiration, and so Britain became dominant within the music industry. The impact of US films and music inspired a series of spectacular and distinctly British youth subcultures from the mid-50's to the late-70's. Many groups decided to drop out of British society. They decided to make their own small societies in Britain. Some wanted to change the whole country as well. In 1953 became the creation of 'Teddy Boys/Girls' this was the first youth group in Britain. They dressed with a Rockabilly' style and with 'quiffs', influenced by Elvis Presley, accessories such as flick-knives, crepe sole shoes, and they were typically from working-class London. They were not so revolutionary but rather violent. Therefore in Britain in the 1950's there was no real pop or rock music however in 1960's pop and rock music in Britain was the biggest, or second biggest revolution in the world. The culture of the 1960's was the hippies. The hippy values were a reaction to 'money' and 'normality'. These values were peace and love. The music of their interest was 'The Beatles', 'The Who', and 'Jimmy Hendrix'. In 1963 became the 'Mods' a Jamaican-rude boy/Italian-cool style, and US soul. ...read more.

For a contemporary pop group manufactured on reality television they have received unprecedented praise from broadsheet newspapers and the rock music press, with publications including the Observer Music Monthly and the NME giving their music rave reviews. The Observer has referred to "Biology" as the single of the decade. Traditional rock and modern rock made forays into pop with consecrated artists and newcomers both introducing songs to the pop music, 'Franz Ferdinand-Take me out' was a good example. Franz Ferdinand is an indie rock band that formed in Glasgow, Scotland in 2001. The band first experienced chart success when their second single "Take Me Out" which I mentioned above reached #3 in the UK Charts, followed by their debut album Franz Ferdinand which debuted on the UK album chart at #3. Entirely digital productions integrated new technology and sounds, and as electronic (electro) dance music entered the mainstream, pop artists started using producers and re-mixers which contributed their styles to the genre an example were the 'Gorillaz-Feel good inc'. Britain hit the pop charts with artists such as 'Robbie Williams-feel good' (2003), 'James Blunt- You're beautiful' (2005), and 'James Morrison- You give me something' (2006). I conclude that Britain have been very successful within pop music, but with a very competitive competition against America. I personally felt that for each decade Britain increased their success within pop and it was down to many aspects but mainly to the talented artists in Britain and the individuality within the music itself. ...read more.