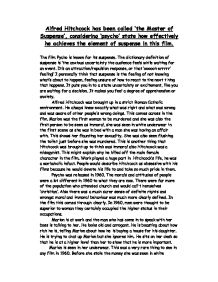 Alfred Hitchcock has been called 'the Master of Suspense', considering 'psycho' state how effectively he achieves the element of suspense in this film.

Alfred Hitchcock has been called 'the Master of Suspense', considering 'psycho' state how effectively he achieves the element of suspense in this film. The film Pycho is known for its suspense. The dictionary definition of suspense is 'the anxious uncertainty the audience feels while waiting for an event. It's an attraction/repulsion response, or that 'oooooh errrrr' feeling!' I personally think that suspense is the feeling of not knowing what's about to happen, feeling unsure of how to react to the next thing that happens. It puts you in to a state uncertainty or excitement, like you are waiting for a decision. It makes you feel a degree of apprehension or anxiety. Alfred Hitchcock was brought up in a strict Roman Catholic environment. He always knew exactly what was right and what was wrong and was aware of other people's wrong doings. This comes across in the film. Marion was the first woman to be murdered and she was also the first person to be seen as immoral, she was seen in white underwear in the first scene as she was in bed with a man she was having an affair with. This shows her flaunting her sexuality. She was also seen flushing the toilet just before she was murdered. ...read more.

The shower scene, in which Marion was brutally murdered, was a huge hit with its audiences. This is because is was so suspenseful. The quick cuts - the entire stabbing lasted only twenty seconds, the sound effects - you could hear the tearing of the flesh as the knife broke the skin but you never actually saw the knife cut the skin, the music - all strings, very high pitched, the sort of music that makes you cringe and know that something big is about to happen, all created a great amount of suspense. When Marion is in the shower we see the door of the bathroom open, but Marion doesn't. Seeing this makes us pay attention, at this point the suspense starts. Then the music starts and we see the knife. At this point we are almost certain that she is going to be murdered. Then the murderer pulls back the curtain and Marion screams. In my opinion, this is the most suspenseful point in the murder. As she is being stabbed, there are alternate shots of Marion and the knife and the music is very loud and fast. When the murderer has gone, everything slows down as Marion slides down the wall and falls to the ground. There is a close up on the blood going down the plug hole after the camera has very slowly zoomed in on it. ...read more.

If Marion had stolen the money from a charity, we would not sympathise with her because she is taking the money from a worthy cause. When Marion and Norman are in the parlour, Marion talks about Norman's mother. She suggests he puts her into a mental home. Norman's reaction to this suggestion builds suspense. He gets very angry and looks like he could get aggressive. He often compares people to birds as stuffing birds is his hobby. When Marion suggests his mother could go to a mental home, Norman compares his mother to one of his stuffed birds on the wall, he says how she is as harmless as one of them. He says how a mother is a boys best friend which makes us believe that he is very close to his mother but he is closer to her then anyone expected. Hitchcock has the title 'The Master of Suspense'. I personally don't think that he deserves that title for this film. In 1960 he may have deserved it for this film as it was the first film like this, but now, in the year 2003, there are many films like this. It has suspense but I don't think it has enough suspense for him to have that title. Psycho is a horror/thriller film and it achieves the title of being a horror/thriller film better than it achieves the title of a suspenseful film. ...read more.