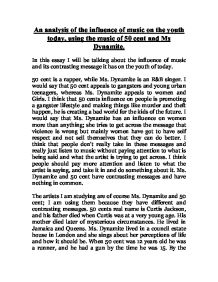 An analysis of the influence of music on the youth today, using the music of 50 cent and Ms Dynamite.

An analysis of the influence of music on the youth today, using the music of 50 cent and Ms Dynamite. In this essay I will be talking about the influence of music and its contrasting message it has on the youth of today. 50 cent is a rapper, while Ms. Dynamite is an R&B singer. I would say that 50 cent appeals to gangsters and young urban teenagers, whereas Ms. Dynamite appeals to women and Girls. I think that 50 cents influence on people is promoting a gangster lifestyle and making things like murder and theft happen, he is creating a bad world for the kids of the future. I would say that Ms. Dynamite has an influence on women more than anything; she tries to get across the message that violence is wrong but mainly women have got to have self respect and not sell themselves that they can do better. I think that people don't really take in these messages and really just listen to music without paying attention to what is being said and what the artist is trying to get across. ...read more.

The songs I will be studying are 50 cent's 'P.I.M.P' and Ms. Dynamite's 'It takes more'. I am studying these songs because they are both very different and both have different influences on the youth today. These songs are significant because by using them I can show how different music affects kids these days. 50 cents 'P.I.M.P' is about how he is a pimp and he does what he wants and treats people how he wants. It's all about how he does not care if people don't like him, he likes his life and no one can stop him from doing what he wants to do. His video is quite p**********c and has lots of explicit lyrics and swearing, and this makes kids think its okay to swear. He says people won't get any money out of him. He is surrounded by a lot of women, who are with him most probably for the money. Ms. Dynamites 'It takes more' however is about how women do not have to sell themselves for money, they can go and work hard and get a job and have some self respect instead of letting people use them and abuse them. ...read more.

Ms. Dynamite sings about how she wants the world to be like and how she thinks it's bad. She wants women to do more for themselves and not sell their bodies to people. 50 cent and Ms. Dynamite don't have the same views on life. In 50 cents song he implies that his life is a good life, and that is how he wants to live it. Ms. Dynamite does not think that 50 cents lifestyle is good she thinks that the world should be better and not full of hate and murder. I have learnt that different people have different ways of living their life, and that people hardly ever agree with other people's lifestyles. I think that music does have a big influence on people, but I think if music wasn't around the world would be a dull place. Music does have contrasting messages. 50 cent acts like it is okay to live the gangster lifestyle and is happy with his life. Ms. Dynamite thinks that people should not live the way 50 cent does and thinks the world is a bad place and should be made better. ...read more.