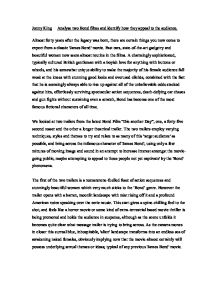 Analyse two Bond films and identify how they appeal to the audience.

Jonny King Analyse two Bond films and identify how they appeal to the audience. Almost forty years after the legacy was born, there are certain things you now come to expect from a classic 'James Bond' movie. Fast cars, state-of-the-art gadgetry and beautiful women now seem almost routine in the films. A charmingly sophisticated, typically cultured British gentleman with a boyish love for anything with buttons or wheels, and his somewhat unique ability to make the majority of his female audience fall weak at the knees with stunning good looks and overused clich�s, combined with the fact that he is seemingly always able to rise up against all of the unbelievable odds stacked against him, effortlessly surviving spectacular action sequences, death-defying car chases and gun fights without sustaining even a scratch, Bond has become one of the most famous fictional characters of all time. We looked at two trailers from the latest Bond Film "Die another Day", one, a forty-five second teaser and the other a longer theatrical trailer. The two trailers employ varying techniques, styles and themes to try and relate to as many of this 'target audience' as possible, and bring across the infamous character of 'James Bond', using only a few minutes of moving image and sound ...read more.

The contrast between the action and the s****l references show the audience all that they want and reassures them that this is to be the best Bond movie to date. The rapid flow to the trailer gives the audience an appetizer of the movie but holds them in suspense as they are left wanting more having been teased with a small taste of the action and s****l connotations which appear in most of the shots to make up the Bond genre. This preview uses visual effects to emphasise the presence of technology and the use of gadgets in the up and coming movie. By having these special effects it shows the audience that there will be state-of-the-art gadgets and modern technology in the film and these will be better, bigger and more powerful than they have been in any other Bond film. The selling point of the film is held in the image on the screen promoting Pierce Brosnan telling the audience what they want to see. By having this in large font across the screen reassures the people that they will see more of what they want and there will be the same type of character who will play the typically English gentleman who saves the world from utter mayhem. ...read more.

Bonds been explaining his big bang theory" and then we get a cameo of Bond and Halle Berry having s*x and Halle Berry replying "Yeah I think I got the (pause) trust of it". This emphasis on the "thrust" shows the audience what to expect and the type of s****l jokes that the film will contain. The s****l innuendo between Bond and the character Jinx is yet again shown during a scene when she says "Wow, now that's a mouthful" once Bond has told her his name, then glancing at Bonds crotch. The previews of s****l connotation in the trailer gives the audience what they want to see, as most of the Bond supporters are male, they will be fascinated by the idea of plenty o s****l content. All of these techniques help the trailers to illustrate and show the audience a taster of what to expect leaving them in suspense and wanting more. The first trailer focuses very much on putting across that 'Die Another Day' will continue to apply the traditional Bond genre to itself however the second very much focuses on the new movie being very different, but both trailers use their own individual techniques to convince the audience that 'Die Another Day' is set to be the best Bond movie to date. ...read more.