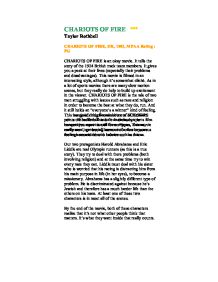 Analysing the film Chariots of Fire.

CHARIOTS OF FIRE *** Taylor Rothbell CHARIOTS OF FIRE, UK, 1981, MPAA Rating : PG CHARIOTS OF FIRE is an okay movie. It tells the story of the 1924 British track team members. It gives you a peek at their lives (especially their problems and disadvantages). This movie is filmed in an interesting style, although it's somewhat clich�. As in a lot of sports movies there are many slow motion scenes, but they really do help to build up excitement in the viewer. ...read more.

This is a good thing because it's one of the main points of the film. This isn't an ordinary sports film because you want to root for everyone. This movie really won't get boring because of a few humorous scenes here and there to balance out the drama. This movie is kind of reminiscent of HOOSIERS minus the basketball and the Indiana, but the competitive aspect is still there. ...read more.

Liddle must deal with his sister who is worried that his racing is distracting him from his main purpose in life (in her eyes), to become a missionary. Abrahams has a slightly different type of problem. He is discriminated against because he's Jewish and therefore has a much harder life than the others on his team. At least one of these two characters is in most all of the scenes. By the end of the movie, both of these characters realize that it's not what other people think that matters. It's what they want inside that really counts. ...read more.