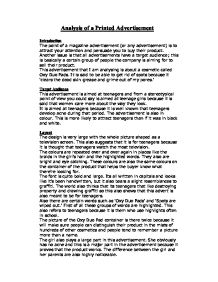 Analysis of a Printed Advertisement

You can see that the advertisement implies that this is boring and is not the way you should be going with your life. The girl however is right at the front of the picture and is staring right at us. This catches the attention of a possible customer. She is reading a book called 'Work Your Way Around The World,' and is saying that she is 'Planning for the Future.' By doing all this, the advertisement tries to say that this is what you should be doing and instead of being like the girl's parents whole are dull and boring you can be like the girl and explore the wide world. They also say that to do this you need to use Oxy Duo Pads and have absolutely no acne. Teenagers say that they do not want to be dull and boring, so they believe the advertisement and also want to be in the position of the girl where you can go and explore the big Wide World. ...read more.

Conclusion I personally did not like the advert since I am not interested in cosmetics but I also feel that overall the advertisement was a success, but there could have been lots of improvements. The female readers might not like it because of her dress sense. Through I know it's to remind the reader of the colour, it still is not very attractive. The advertisement could have appealed to males as well by maybe having a beautiful looking girl or a girl wearing something sexy. Because of the plainness of her makeup and clothes it doesn't make much impression with male readers and could have made a better impression on the female readers. Though it is a good advert, it is easy to see that we are being manipulated and are seeing only one side of the argument. For example, the advert says that their product will get rid of spot, but they fail to mention that it will dry up your skin over a long period of time of extensive usage. On the whole I feel the advertisement was a success and would have easily brought in lots of buyers. Malavarayan Koshalavarman ...read more.