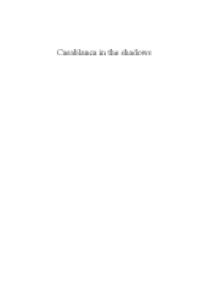 Analysis of a scene from 'Casablanca'.

ï»¿Casablanca in the shadows ________________ Casablanca is a 1942 American romantic drama film that is focused on an American expatriate who must choose between his love for a woman and helping her husband to escape of Casablanca to continue his fight against the Nazis. I decided to analyse a shot of this film because I think Rick is an interesting character because he wants to show that is a cool person but in the bottom of his soul he has feelings and I want to analyse that feelings. The shot I choose to analyse is not last particularly long or highly relevant but I choose it because I think that this shadow silhouette of Rick shows us his dark side. First of all, it is very important to contextualise the shot in the film. It occurs when Captain Renault warns Rick not to help his friend Lazlo. The captain and Rick are talking outside the Café when an employee of Rick tells him that something has won a lot of money and they do not have enough cash to pay him. ...read more.

As I said before, it is very difficult to know what they want to say with their faces but we can analyse other important aspects as the clothes. Renault dressed in a decorated military uniform, he is a constant reminder of the war. Conversely, Rick is wearing a bright white tuxedo and bowtie. His ensemble is sculpted to his body, producing an air of sophistication and strength. This costume implies that he is an important figure. Rick walks with his arm in the pocket and the other arm holding the cigarette, showing that he is not interested in the subject that they are talking about. The shot occurs inside the Rick’s Café, main place of the film. The first part of the shot is downstairs when people are enjoying, dancing and drinking and the second part is upstairs when Rick opens the door to his office. The structure of the café is the typical Moroccan architecture with white and high ceilings and open spaces with few white walls. Rick’s Café is an important place of the film because it is a unique place and gaming house that attracts a varied clientele including people who want to flee to America. ...read more.

It is a very dark scene that suggests dark emotions. Many of scenes with Rick, show half his face in the light, and half shadowed. To conclude my analysis, we have to talk about editing. The importance of editing is to make absolutely clear the spatial organization of the scene. Not only is editing important to the storyline itself, but it is important in the sense that it allows for the meshing of several genres. With the use of cuts, the director can show simultaneous scenes at once that depict a different genre. For example, Laszlo and Karl must escape the Nazis, but at the same time we can see a romantic scene between Ilsa and Rick. Moreover, as we know, the film was never shot in Casablanca; everything was recorded in a studio. Editing allows see the physical continuity errors with the dimensions of Rick?s bar but when shots are cut together, they keep the viewer focused on the characters and story rather than obvious mistakes. Editing is also essential in building up suspense for the ending. Editing allows us to know that Captain Renault called the German Officer. It also allows us to see the shots of the captain approaching the airfield. Without editing in the phone conservation, the finale would be a boring predictable affair. ...read more.