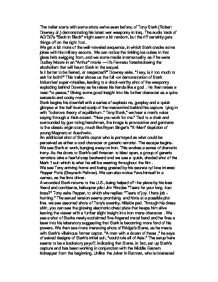 The trailer starts with some shots we've seen before, of Tony Stark (Robert Downey Jr.) demonstrating his latest war weaponry in Iraq. The audio track of AC/DC's "Back in Black" might seem a bit random, but the riff certainly gets things off on the right foot. We get a bit more of the well-traveled sequence, in which Stark cracks some jokes with his military escorts. We can notice the tinkling ice cubes in that glass he's swigging from, and we some media intertextuality as if he were Dudley Moore in an "Arthur" movie - it's Favreau foreshadowing the alcoholism that will haunt Stark in the sequel. Is it better to be feared, or respected?" Downey asks. "I say, is it too much to ask for both?" This trailer shows us the full-on demonstration of Stark Industries' super-missiles, leading to a drool-worthy shot of the weaponry exploding behind Downey as he raises his hands like a god. He then raises a toast "to peace," Giving some good Insight Into his further character as a quite sarcastic and cocky man. ...read more.

We see a shot of Starks newly acclaimed five-fingered metal hand and he fires a laser into his labaratory suggesting that Stark is becoming more fond of his powers. We then see more menacing shots of Bridge's Stane, as he meets with Stark's villainous former captor. "A man with a dozen of these," he says of seized designs of Stark's initial suit, "could rule all of Asia." The setup here seems to be a backstory payoff, indicating that Stane, in fact, set up Stark's capture and has been working in conjunction with the Middle Eastern kidnapper from the beginning. Unlike the Joker In Batman, who is interested only in anarchy and chaos, Stane is a more conventional and generic methodical supervillain known for setting up moves well in advance, with each act an incremental step to an overall goal. His goal here Is most likely a total takeover of Stark Industries. We then see Stane supervising the production of a replica suit that he will later wear as Iron Monger. It is our first look at the armor forming around Stark's body. ...read more.

We've heard a lot of talk about comic book billionaire playboys who supposedly romance the town when they're not saving the world. The mind reels at the possibilities of what Stark is referring to. This leaves it up to the audience to anticipate the overall outcome enticing them to go see the movie. Iron Man and Iron Monger do battle. In the early going, it's Iron Monger who throws Stark against a car, which also lives up to audience expectations as we see the super-hero struggle, at first, with their new found powers. -"There's been speculation that I've been parading around as a superhero," Stark says at a press conference, as shots of him causing havoc are intercut. "I'm just not the hero type ... clearly." Here we see a case of dramatic irony. The trailer's first dubious shot, and it comes at the end. A missile is fired at Stark from a tank. Stark calmly moves out of the way and fires a rocket back. The scene looks heavily CGI-ed, although it's possible that's done intentionally. Black Sabbath's "Iron Man." is playing which further evokes a sense of anticipation and the joy of recognition as it seems so relevant to the film. ...read more.