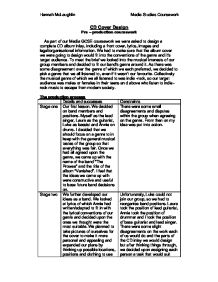 CD Cover Design Pre - production coursework As part of our Media GCSE coursework we were asked to design a complete CD album inlay, including a front cover, lyrics, images and legal/organisational information. We had to make sure that the album cover we were going to design would fit into the conventions of the genre and it's target audience. To meet the brief we looked into the musical interests of our group members and decided to fit our band's genre around it. As there was some disagreement over the genre of which we each preferred, we decided to pick a genre that we all listened to, even if it wasn't our favourite. Collectively the musical genre of which we all listened to was indie-rock, so our target audience was males or females in their teens and above who listen to indie-rock music to escape from modern society. The production process Details and successes Constraints Stage one Our first lesson. We decided on band members and positions. Myself as the lead singer, Laura as the guitarist, Luke as bassist and Annie on drums. I decided that we should focus on a genre to in keep with the general musical tastes of the group so that everything was fair. Once we had all agreed upon the genre, we came up with the name of the band "The Prowse" and the title of the album "Vanished". I feel that the ideas we came up with were constructive and useful to base future band decisions on. ...read more.

Not only did we do this to carry on with the stereotypical connotations of indie-rock music, we thought that sepia images and black and white images especially reflected and emphasized depression in photographs. We kept the font in blue, grey and white colours so that they would stand out from the images. Font We decided to keep the font curvy, simple and quite easy to read to suggest that the music that would be created by this band would be easy to listen to. We kept the font the same throughout the artefact, only changing the font colour so that each page would be linked together. Graphics Looking through the images in our inlay, you will be able to see that they are stereotypically like many others in the indie-rock genre. There are two pictures of each of our band members, one being musically influenced and the other to do with apathy or slight depression/loneliness. No body is smiling in any of the photographs, reflecting some of the lyrics in the songs. Camera angles There are a few close ups within our CD inlay images. We decided to close up on the burning match and the worn suitcases because we felt that they were quite relevant to our aim. As I said before, the burning match gave a sense of a burnt out emotion and I feel that the suitcases meant feeling quite lost and as if there is no 'home' for the subject to go to. ...read more.

Rough Trade. I would expect to find this CD released under this label because it is well known for attracting the more independent bands (usually indie-rock) that are stereotypically in our genre. I feel that the first single to be released from this album would be 'Dirty Cigarettes and Cellophane Cameras'. When we researched into other bands we found that bands like ours had hit singles that had names similar to this. Summary If I was a consumer of music and was looking at this CD as an artefact in front of me, I feel as though it would appeal to me. I like the way that the front cover is simple yet has a deep meaning and I am the kind of person who bases their decision on buying a CD on the appearance of the front cover. Ways that this CD could be promoted and distributed could include: * Advertising in magazines for music fans * Sending free demo CD's to subscribers to fan clubs of other bands signed to their label * Play a live set/gig and promote it using posters and banners * Hand out money off vouchers for copies of their CDs. If we were to do this project again, I feel that I would like to try to be more organised about the taking and editing of the band pictures. I feel that we could have taken the pictures elsewhere out of school in more interesting areas with more interesting landscapes. ?? ?? ?? ?? Hannah McLaughlin Media Studies Coursework ...read more.