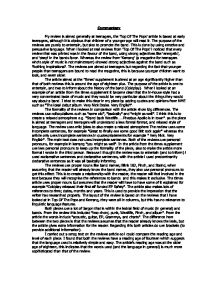 Child aimed reviews in the media.

Commentary My review is aimed generally at teenagers, the 'Top Of The Pops' article is based at early teenagers, although it is obvious that children of a younger age will read it. The purpose of the reviews are purely to entertain, but also to promote the band. This is done by using emotive and persuasive language. When i looked at real reviews from 'Top Of The Pops' i noticed that every review that was printed was in the favour of the band, using strong adjectives like 'energetic', and 'deep' in the bands favor. Whereas the review from 'Kerrang' (a magazine for teenagers who's style of music is not mainstream) ...read more.

When i looked at an example of an article from the times supplement it became clear that the in-house style had a very concentrated taste of music and they would be very particular about the things they would say about a band. I tried to make this clear in my piece by adding quotes and opinions from NME such as "The ideal debut album. Very Nick Drake. Very English". The formality of the reviews in comparison with the article show big differences. The reviews use colloquialisms such as "same old", "basically" and "might as well". I think this is to create a relaxed atmosphere e.g. "Stand back Westlife.....Pheobus Apollo is in town". ...read more.

Because i thought the review was to entertain (and to inform) i used exclamative sentences and declarative sentences, with the article i used predominantly declarative sentences as it was all basically informing. The reviews use proper nouns like band names; Blink 182, Finch, and Staind, when assuming that the reader will already know the band names, they also use personal pronouns to get this effect. This is to create a relationship with the reader, the reader will feel involved in the text because they will recognise the references to bands and this makes it exclusive. The times article uses proper nouns but assumes that the reader will have to have some of it explained for example "Coldplay released their first elf funded EP Safety". ...read more.