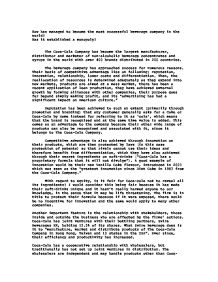 Coca cola How has managed to become the most successful beverage company in the world?

How has managed to become the most successful beverage company in the world? Has it established a monopoly? The Coca-Cola Company has become the largest manufacturer, distributor and marketer of non-alcoholic beverage concentrates and syrups in the world with over 400 brands distributed in 200 countries. The beverage company has approached success for numerous reasons. Their basis of competitive advantage lies on following: reputation, innovation, relationship, lower costs and differentiation. Then, the reallocation of resources is determined adequately as they expand into new markets, products are aimed at a mass market, there has been a recent application of lean production, they have achieved external growth by forming alliances with other companies, their purpose goes far beyond simply making profit, and its "advertising has had a significant impact on American culture." Reputation has been achieved to such an extent (primarily through promotion and branding) that any customer generally asks for a Coke or Coca-Cola by name instead for referring to it as 'cola', which means that the brand is recognised and at the same time value is added. This comes as an advantage to the company because their other wide range of products can also be recognised and associated with it, since it belongs to The Coca-Cola Company. Competitive advantage is also achieved through innovation on their products, which are then protected by laws (in this case protection of patents) ...read more.

They benefit primarily from financial, purchasing, technical and marketing economies. With financial economies it is to assume that banks will lend a larger amount of capital to the business and with a lower rate of interest compared to small or medium firms because they might feel that it's much safer, the chances a recouping finance (redemption payments) is much higher than with a small establishments. Purchasing economies implies that they are able to manufacture drinks more cheaply (by purchasing in bulk) than rivals, thus it enables them to have cost-leadership as well as technical economies, meaning that the firm becomes more capital-intensive. They utilise advanced machinery to manufacture goods rapidly and hence a greater output. "Marketing economies can be achieved if the firm is large enough to employ mass marketing strategies." Coca-Cola is frequently credited for the modern image of Father Christmas. In the past, Santa's disguise use to be green, but ever since he appeared in Coke's television advertisements, he is identified as being red. Furthermore, their success also lies on various marketing mix techniques like pricing, packaging and promotion plus numerous slogans such as: "I'd like to buy the world a Coke", "Coke ... goes with the good times" and "Life tastes good." It is considered that "as a brand and drink, it is a powerful symbol of the US life and culture." A mission statement "clearly expresses a purpose of a business, although it is widely expected that a business must look beyond 'the bottom line' (profitability)." ...read more.

In addition, Pepsi has pressed antitrust charges against Coke, claiming that they control "90% of the market for "fountain-dispensed soft drinks distributed through independent foodservice distributors." This suggests that Coke possesses the power to control prices in the market and also has the power to exclude competition. I believe that Pepsi stands correct because Coca-Cola has made agreements with major foodservice distributors such as McDonalds and Burger King, restricting any sales of Pepsi's soft-drinks, and threatening to cut supplies if done so. There may be a duopoly between both brands, Pepsi and Coke, between them both lies perfect competition because Pepsi is also a very well known beverage due to the fact that they have launched various successful TV advertisements involving popular celebrities, although if we speak about The Coca-Cola Company and PepsiCo as a whole, I think that there is definitely no perfect competition since The Coca-Cola Company owns a much larger market share than PepsiCo and have used unethical business practices through unfair barriers of competition for rivals. The bottom line is that The Coca-Cola Company can be classed as a monopoly thanks to its marketing tactics which has led them to its soft drink market dominance, since it is considered to own 90% of the market share and also due to several barriers of entry and competition it has created through: economies of scale, product differentiation, legal protection and strategic alliances. Finally, their actions suggest that this has been an unfair accomplishment, given that they have made agreements with potential foodservice distributors, movie theatres and other businesses, forbidding any commerce of Pepsi thirst-quenchers. ...read more.