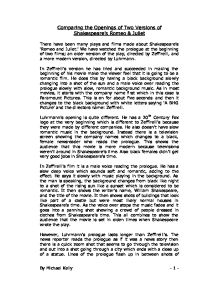 Comparing the Openings of Two Versions of Shakespeare's Romeo & Juliet There have been many plays and films made about Shakespeare's 'Romeo and Juliet.' We have watched the prologue at the beginning of two films; an older version of the play, directed by Zeffirelli, and a more modern version, directed by Luhrmann. In Zeffirelli's version he has tried and succeeded in making the beginning of his movie make the viewer feel that it is going to be a romantic film. He does this by having a black background slowly changing into a shot of the sun and a male voice over reading the prologue slowly with slow, romantic background music. As in most movies, it starts with the company name first which in this case is Paramount Pictures. ...read more.

As the man is speaking, the background changes from black like night to a shot of the rising sun like a sunset which is considered to be romantic. It then shows the writer's name, William Shakespeare, and the title of the movie. It then shows shots of buildings that look like part of a castle but were most likely normal houses in Shakespeare's time. As the voice over stops the music fades and it goes into a panning shot showing a crowd of people dressed in clothes from Shakespeare's time. This all combines to show the audience that the movie is set in olden times when Shakespeare wrote the play. However, Luhrmann's prologue lasts longer than Zeffirelli's. The news reporter reads the prologue as if it was a news story then there is a quick zoom shot that seems to go through the television and out into a shot going through a city which ends with a close up of a statue. ...read more.

The music stops and it cuts to a shot of some of the characters and starts the story. The beginning of these two films are similar because they both have the same prologue, same characters and both show the names of the companies who made the film at the beginning. However, they are different because Zeffirelli has made the prologue seem romantic and Luhrmann has made it more exiting to grab the audience's attention by making shots flash up then go away really quickly. In my opinion, Zeffirelli's version would attract woman and older people to watch it. Luhrmann's version, however, will mostly attract males and the younger generation because it is more modern. Looking at these two prologues, the one that mostly appealed to me was Luhrmann's version. This is because it is faster and seems more action packed which is the type of movie I prefer. ?? ?? ?? ?? - 1 - By Michael Kelly ...read more.