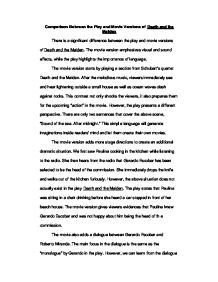 She then hears from the radio that Gerardo Escobar has been selected to be the head of the commission. She immediately drops the knife and walks out of the kitchen furiously. However, the above situation does not actually exist in the play Death and the Maiden. The play states that Paulina was sitting in a chair drinking before she heard a car stopped in front of her beach house. The movie version gives viewers evidences that Paulina knew Gerardo Escobar and was not happy about him being the head of the commission. ...read more.

The play's beginning was no as interesting as the movie's. I also liked the acting in the movie. When Paulina takes out a gun from the drawer, I could clearly hear the heavy breathing and see her facial emotions. In the play, it only says that she takes out a gun from the sideboard. The play's direction did not show Paulina's emotion and feeling at that time. Overall, I prefer the movie version of Death and the Maiden to the original version based on Scene 1. The movie was more entertaining because I can clearly see the character's emotions and hear the detail sounds of the weather. Word count: 452 ?? ?? ?? ?? ...read more.