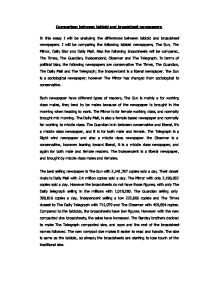 Comparison between tabloid and broadsheet newspapers.

Comparison between tabloid and broadsheet newspapers In this essay I will be analysing the differences between tabloid and broadsheet newspapers. I will be comparing the following tabloid newspapers, The Sun, The Mirror, Daily Star and Daily Mail. Also the following broadsheets will be compared, The Times, The Guardian, Independent, Observer and The Telegraph. In terms of political bias, the following newspapers are conservative The Times, The Guardian, The Daily Mail and The Telegraph; the Independent is a liberal newspaper. The Sun is a sociological newspaper; however The Mirror has changed from sociological to conservative. Each newspaper have different types of readers, The Sun is mainly a for working class males, they tend to be males because of the newspaper is brought in the morning when heading to work. The Mirror is for female working class, and normally brought mid morning. ...read more.

Compared to the tabloids, the broadsheets have low figures. However with the new compacted size broadsheets, the sales have increased. The Barclay brothers decided to make The Telegraph compacted size, and soon and the rest of the broadsheet names followed. The new compact size makes it easier to read and handle. The size is same as the tabloid, so already the broadsheets are starting to lose touch of the traditional size. The prices of the newspapers vary, the tabloids are much cheaper then the broadsheets. This is due to the quality and perhaps because broadsheets mostly brought by middle class. The Sun is 30 pence during the week and 45 pence on Saturdays. The Mirror is priced at 32 pence during the weekday and on Saturday priced at 45 pence. The Daily Mail is priced at 40 pence from Monday to Friday and 70 pence on Saturday. ...read more.

On the other hand, the broadsheet is the opposite, with about 75% of writing and only 25% of pictures. However broadsheets are starting to copy tabloid with more pictorial images and with the strip of advertisement at the top the newspaper, 15 years ago, there was no advertising strip. They broadsheet have also introduced more freebies, something very popular with the tabloids. On the front page of broadsheet, are there many headlines with the main one in the largest font and also an associated pictured. The tabloid newspapers usually have only two headlines with a main one in bold and large font. Broadsheets have many stories on the front page, gives the reader more to close from. The headlines are mostly political, national and international. However tabloids have more celebrity and sport stories that are on the font page. The main photographs on the broadsheets are linked with the main story; the tabloid photograph usually has a picture of a celebrity and then indicates the page number for more about the story. ...read more.