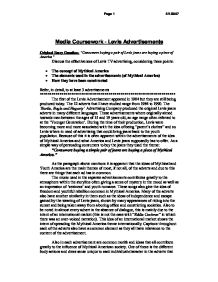 The original briefing of the "Bartle, Bogle and Hegarty" Advertising company was to advertise the Levis jeans in a way that the jeans would appear appealing to the younger generation, especially young men. To appeal to the males they use separate methods. An example of one of these methods would be the mixture of younger, attractive women along with a sexy atmosphere. A perfect instance of this is in the advert "Refrigerator". "Refrigerator" is set in a dusty, American, desert highway bar or station. The atmosphere is very hot, dusty and sweaty. It begins with a view of the highway, the camera high above the road, extending towards the horizon. A few seconds after the advert starts we see the entrance of an old man leaving a truck and entering the traditional, Mythical American bar as the camera pans down. This man is an ideal example of the older, dirty, almost disgusting generation. As the old man sits down in the empty bar the accompanying music impacts the mood of the bar, a mood often associated with sexiness. This adds to the sexy and mysterious atmosphere already set by the environment of low light and dust inside the bar. ...read more.

This advertisement is mainly different in the fact that unlike the others, the woman doesn't follow or go along with the man wearing the Levis. This advert is more proof that the advertisers were basically saying that those who wear Levis are becoming an individual and distinguished from the rest of society when in actual fact you would become one of many. The idea of using Mythical America in all of these adverts was probably one of the main contributions to the incredible increase in Levis sales after they had been aired between 1984 and 1987. The estimated increase of Levis sales was 20 times more than original. This was probably due to the fact that the propaganda of coolness linked with wearing Levis appealing to the young males towards whom it was aimed at. In conclusion the Levis jeans were very effective in increasing sales, this is further proved by the fact that even the sales of white boxer shorts had increased as they were repeatedly shown in the Levis adverts as a sign of how clean and 'cool' the younger generation would be if they wore that type of clothing. Along with the idea of Mythical America and complex motifs and ideas shown in the adverts the advertising was definitely very successful. Chris Sadler Page 1 5/1/2007 ...read more.