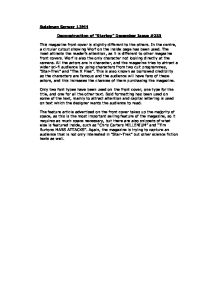 Sulaiman Sarwar 13MH Deconstruction of "Starlog" December Issue #233 This magazine front cover is slightly different to the others. In the centre, a circular cutout showing Worf on the inside page has been used. The inset attracts the reader's attention, as it is different to other magazine front covers. Worf is also the only character not looking directly at the camera. All the actors are in character, and the magazine tries to attract a wider sci-fi audience by using characters from two cult programmes, "Star-Trek" and "The X Files". This is also known as borrowed credibility as the characters are famous and the audience will have fans of these actors, and this increases the chances of them purchasing the magazine. Only two font types have been used on the front cover, one type for the title, and one for all the other text. ...read more.

Just by looking at the photograph the reader knows that the magazine is aimed at Star-Trek fans, as they would only be able to recognise whom he character is. The actor is in character, which suggests that the magazine is only going to contain information on Star-Trek related gossip, and not on the actor's real life. The magazine uses captions and extravagant text to create attention. "Fourth Season Excitement!" is in capital lettering and the punctuation creates anticipation due to the exclamation mark. Also, "The official magazine" has been inserted because it shows that this magazine will contain the latest information and the word "official" makes the reader think that this magazine is a reliable and truthful source. Once again, the designer has used a different font for the title which gives it a unique and eye-catching look. ...read more.

The layout of the cover is different as compared to the others. The main selling point are the crew photos. No large bold captions have been used either, only three lines of text have been inserted below the title to give the reader some more information on the articles featured inside. Also underneath the title, the publisher has inserted, "20 YEARS EXPLORING SCIENCE-FICTION". This shows that the magazine has a long reputation and this may encourage the reader to purchase it due to its reliability over the years. Once again, the magazine incorporates several styles of font to create attention and to create professionalism. The typical "Star-Trek" font has been used on the title, connoting futurism and science. The Starlog title has its own font which separates itself from the magazine and also this font is used all the time for the title as existing fans will be able to recognise it. ...read more.