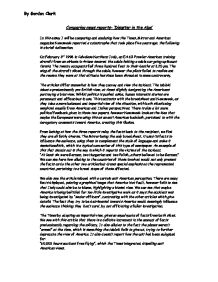 'Disaster in the Alps' - comparing and analysing how the Times, Mirror and American magazine Newsweek reported a catastrophe that took place five years ago.

Comparing news reports- 'Disaster in the Alps' In this essay I will be comparing and analysing how the Times, Mirror and American magazine Newsweek reported a catastrophe that took place five years ago; the following is a brief delineation. On February 3rd 1998 in Calvalese Northern Italy, an EA-6B Prowler American training aircraft from an airbase in Aviano severed the cable holding a cable car going up Mount Cermis. The twenty occupants fell three hundred feet to their deaths at 3.25 pm. The wing of the aircraft sliced through the cable, however the pilots failed to realise and the reason they were at that altitude has since been shrouded in some controversy. The articles differ somewhat in how they convey and view the incident. The tabloid takes a predominantly pro-British view, at times slightly denigrating the Americans portraying a bias view. Whilst politics is pushed aside, human interests stories are paramount and efficacious in use. This contrasts with the broadsheet and Newsweek, as they take a more balanced and impartial view of the situation, with both sides being weighted equally from American and Italian perspectives. There is also a lot more political feedback given in those two papers, however Newsweek invokes the idea that maybe the Europeans were using this as an anti American backlash, pertained to with the derogatory comments toward America, creating this illusion. From looking at how the three reports relay the facts back to the recipient, we find they are all fairly diverse. The Mirror being the only broadsheet, it uses its facts to influence the audience, using them to complement the style of language and make it sensationalistic, which is a typical convention of this type of newspaper. ...read more.

The pilots referred to in colloquial terms "Jocks" pertaining to a boisterous, brazen type who "Hotdog" a symbolism of America between the cables, exemplifying the view that maybe these pilots were exceeding the rules. This opinionated writing of the pilots transcends into a slightly exaggerated picture as seen with the tabloid. Again a pun is used to describe the wires as being "high tension", would reflect the tension caused by the crash and the consequential tension the locals in the area felt. This is embodied with how the Italians raised a "collective howl" a metaphor alluding to a wolf like pack, united against America, trying to evoke emotion with the audience and change their viewpoint to realise the plight of the Italians. This article takes an unusual stance on the incident as it is predominantly impartial with both sides being addressed in proportionate ways, whilst elevating the pilots saying "these guys were good." It doesn't seek to belittle the pilots or be derogatory towards them, however we are able to ascertain that the Americans are being defended, due to the journalists perception that America was being denigrated throughout Europe due to the crash, revitalising further anti American feelings. These feelings are clearly seen in the tabloid, manipulating the audience to be imbued with this pro British, anti American stance. Being detrimental towards the pilots and totally bias in the way that it views the incident with no American side being regarded, further emphasised with the ingenious use of sensational language. The broadsheet is a further differentiation in how the language supports the typical standing with the article being impartial, whilst unmunipulating in trying to influence, as seen with the tabloid, the audience or portray a bias view. ...read more.

This is a juxtapose against the long drawn out paragraphs seen in the broadsheet and Newsweek, a typical broadsheet convention exuded here. The broadsheet however contravenes its usual convention, in that with this article we have three examples of media representation. This is unusual for a broadsheet, which usually employs sufficient textual detail, to suffice the readership, here however it has resorted to illustrations to convey the incident. The Newsweek however is different to the rest with no visual representations given, but does include a sub-headline, beneath a bold plain typeface, whilst having an enlarged bold letter to inaugurate the article. Conclusively, looking at the articles from a general standpoint, I think that the broadsheet gives the best portrayal of the incident, whilst delegating to the reader a sufficient amount of facts to make them aware of what happened. I also think that we're able to ascertain what really happened without the dramatic presentation of facts, along with the distortion of truth found in the tabloid, which blows the incident out of proportion. With the innovative use of vivid illustrations and enlightening detail along with an impartial view, we are clearly able to encompass the magnitude of the incident. Although Newsweek is a definitive, it lacked the needed depth to make the reader visualise the scene of carnage, whilst giving the impression of being too pro American. This resulted in the shirking of guilt for the crash, trying to shift some of the blame to the Italians. The complete opposite is seen in the tabloid, in the disparagement of America, and the elevation of pro British notions that America was at fault, whereas the broadsheet takes a neutral standpoint not seeking to promote or belittle America for their actions. ...read more.