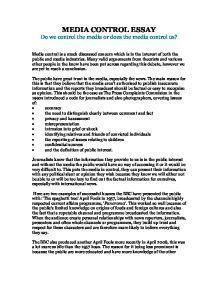 Do we control the media or does the media control us?

MEDIA CONTROL ESSAY Do we control the media or does the media control us? Media control is a much discussed concern which is in the interest of both the public and media industries. Many valid arguements from theorists and various other people in the know have been put across regarding this debate, however we are yet to reach a conclusion. The public have great trust in the media, especially the news. The main reason for this is that they believe that the media aren't authorised to publish inaccurate information and the reports they broadcast should be factual or easy to recognise as opinion. This should be the case as The Press Complaints Commision in the 1990s introduced a code for journalists and also photographers, covering issues of: * accuracy * the need to distinguish clearly between comment and fact * privacy and harassment * misrepresentation * intrusion into grief or shock * identifying relatives and friends of convicted individuals * the reporting of issues relating to children * confidential sources * and the definition of public interest. Journalists know that the information they provide to us is in the public interest and without the media the public would have no way of accessing it or it would be very difficult to. ...read more.

Perhaps the media were controlled by the McCann parents by getting the information they wanted out to the public via the media. However what about when the media turned on them? The McCann parents were accused of killing their daughter by the tabloids, without any evidence. A lot of people believed this story, although, by then a lot of information and different sides of the story had been published, so it gave the public something to decide about by themselves. When the public lose interest in a highly profitable story, the tabloids tend to add information and different opinions to the story, to keep interest. When a group of people are being represented by the media, they are being presented with a one sided opinion, usually of the producer of a film, journalist or advertiser etc. The media create stereotypes, usually they are negative and can often cause offence to the stereotyped group. For example, during war the media will present the opposing country/group negatively whilst presenting themselves as positively as possible. They use different words and phrases that mean the same thing but have different connotations, to create mass dislike of the opposing side, such as: collateral damage - murdering innocent persons. This could be classed as propaganda, indoctrinating the public into believing that the opposing side are inhuman, evil and perhaps even the cause of all the wrong in the world. ...read more.

The ultimate descision is always down to the consumer whether to buy the product or not, but when a passive viewer is targetted with constant messages it is difficult for them not to respond. From the information that I have gathered, I have decided that the media is most definitely in control. We believe that we are in control because the media seem to be presenting us with choices. I think that the media want us to believe that we are in control because if we felt we were being controlled, we are likely to rebel. Language in advertising shows that they want to persuade us to buy a product/service by being friendly rather than seeming powerful by forcing the consumer to buy the product, modal verbs are used a lot to persuade such as should. The recent 12A classification band is another example of the media making it seem as if we are in control. It makes the parents feel like they are in control. The reciever always has the ultimate descision whether to believe information the media are giving to us. Perhaps because we are so used to the media being there to provide us with information, for such a small price instead of us having to find it out for ourselves, it has caused us, as a nation to be lazy. [1] ^ http://ladyofshalottstragedy.blogspot.com/2006/10/does-media-control-us.html ...read more.