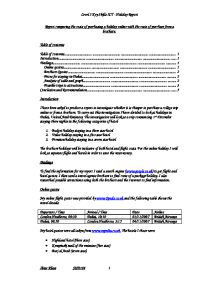 Report comparing the costs of purchasing a holiday online with the costs of purchase from a brochure. Table of contents Table of contents 1 Introduction 1 Findings 1 Online quotes 1 Brochure Quotes 2 Prices for staying in Dubai 2 Analysis of table and graph 2 Possible trips to attractions 3 Conclusion and Recommendation 5 Introduction I have been asked to produce a report to investigate whether it is cheaper to purchase a college trip online or from a brochure. To carry out this investigation I have decided to look at holidays in Dubai, United Arab Emirates. The investigation will look at a trip commencing 1st December staying three nights in the following categories of hotel: 1. Budget holiday staying in a three star hotel 2. Value holiday staying in a five star hotel 3. Premium holiday staying in a seven star hotel The brochure holidays will be inclusive of both hotel and flight costs. For the online holiday I will look at separate flight and hotels in order to save the most money. Findings To find the information for my report I used a search engine (www.google.co.uk) to get flight and hotel quotes. ...read more.

In the past the fort was used to defend the town from warlike neighbouring tribes. It has also served, at various times throughout history as the seat of government, the ruler's residence, a store for ammunition, and a jail. The walls of the fort are built from coral and shell rubble from the sea, and are cemented together with lime. Wooden poles called Handel support the upper floor, and the ceiling is made of palm fronds, mud and plaster. A massive, iron-studded door stands at the entrance, and its battle-scarred walls and towers bear witness to the conflicts of the past. When the Museum was opened by the ruler of Dubai in 1971, its main aim was to furnish a record of the Emirate's traditional life, much of which is fast disappearing. Local antiquities have been collected and stored, along with artefacts from many African and Asian countries, trading partners with the Emirate, throughout its long commercial history. At the Museum's entrance, the visitor can browse through a collection of old maps of the Gulf and the Emirates, together with aerial photographs showing Dubai's considerable urban expansion between 1960 and 1980. Inside, a treasure trove awaits. ...read more.

Grand Mosque along Al Mussalla Road, near Ruler's Court, Dubai, is also known as Al-Jumeriah Mosque and is also the most photographed building in Dubai. The most striking feature of all Islamic architecture has been identified as the one which focuses more on the interior space than on the outside or facade. Traditional Islamic art and architecture has its roots in 7th-century Syrian culture from where it widened its scope to include the art and architecture from regions as far as Atlantic and South Asia. According to experts, when Traditional Islamic Architecture is considered from the point of view of the then architects, there is nothing Islamic in their work, nor is there a dominant style which can be delineated from Islamic Art. Regional variations are innumerous and diversified, the unifying principles being the existence of geometric design and arabesque styles. Conclusion and Recommendation The results suggest that the college would save money if it booked trips online. For every category of hotel the online trip was cheaper. The reason for this difference could be the convenience of booking a package holiday from a brochure. Despite the convenience of booking a brochure holiday there is a large cost saving from planning the trip yourself and I would recommend that the college books its own trips online. Level 2 Key Skills ICT - Holiday Report Ibrar Khan S070184 1 ...read more.