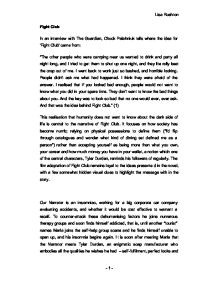 Fight Club In an interview with The Guardian, Chuck Palahniuk tells where the idea for 'Fight Club' came from: "The other people who were camping near us wanted to drink and party all night long, and I tried to get them to shut up one night, and they literally beat the c**p out of me. I went back to work just so bashed, and horrible looking. People didn't ask me what had happened. I think they were afraid of the answer. I realised that if you looked bad enough, people would not want to know what you did in your spare time. They don't want to know the bad things about you. And the key was to look so bad that no one would ever, ever ask. And that was the idea behind Fight Club." (1) This realisation that humanity does not want to know about the dark side of life is central to the narrative of Fight Club. It focuses on how society has become numb; relying on physical possessions to define them ("I'd flip through catalogues and wonder what kind of dining set defined me as a person") rather than accepting yourself as being more than what you own, your career and how much money you have in your wallet, a notion which one of the central characters, Tyler Durden, reminds his followers of regularly. ...read more.

One of the main gripes in Fight Club is the consumerist society, and at its heart is a dark parody about consumerist discontent. The film engages with this idea by regularly not showing faces and focussing on other aspects to identify them. The first instance this is shown is when the unnamed central character, unnamed because it could be any twenty-something male, is approached by his boss. He immediately focuses on his tie, identifying the day as Tuesday because his boss was wearing his "cornflower blue tie". We then get a glimpse of how our main character has fallen victim to the Ikea trend, the camera pans around his apartment with the catalogue descriptions of each item he owns appearing next to it. The scene finishes with a comment about how "we used to read p*********y, now it was the Horchow collection" which fully shows how consumerism has become the new form of self- gratification. It's only when his apartment is blown up that he begins his journey to total freedom, his entire identity was enclosed in that apartment, and now that it has gone he begins again - "It's only after we've lost everything that we're free to do anything." Director, David Fincher, employs an impressive array of techniques to tell the story, combining traditional cinematic conventions (voice over's, breaking the fourth wall to address the audience directly) ...read more.

As the film evolves, he methodically reveals each new turn in an ever-deepening spiral that descends into darkness and madness. The reason Fight Club is such a memorable film, lies in its ability to reach out to modern society, of a certain age at least, and engage and relate to them in someway. The characters acknowledge at more than one point that they're in a film. The Narrator makes sarcastic voice-over remarks, and is constantly rewinding and fast-forwarding through his story. After the Narrator has giving us the whole story, we return to the comment "this is about where we left off," and Tyler's response, "Oh. Flashback humour." Fight Club takes on everything that cinema can do but has been too afraid to. Maybe it is the fights that stand out the most. In an era of 'fake' fight scenes, beefed up with special effects, the fight scenes in Fight Club have a somewhat narcotic effect; with their documentary feel it's much more realistic. The lack of music only adds to the atmosphere, with the only memorable music being at the very end of the film - appropriately named "Where Is My Mind?" Fight Club is a daring film, forcing you to thing outside the box with how a Hollywood film should look and feel. It also forces the audience to question their lives, in modern times most people can not help but be caught up in the consumerist rat-race. ...read more.