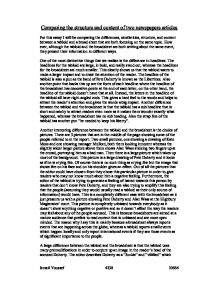 For this essay I will be comparing the differences, similarities, structure, and content between a tabloid and a broad sheet that are both focusing on the same topic. How ever, although the tabloid and the broadsheet

This is because broadsheets are aimed at a mature audience that prefers to read content that is unbiased and are more open minded. The reason why I say this is mainly because a broadsheet always reports events that are happening across the globe, whereas a tabloid reports small events which happen locally and only report international events if they see those events as of significant importance to the people. A large difference between the tabloid and the broadsheet is that the tabloid uses many premodifications in order to conjure up an image in the reader's head of the accused Doherty. The editor describes Doherty as a "Junkie" and "vilified" which immediately makes all readers think that Doherty is a criminal and that he is completely useless to society and to himself. This is completely different from the broadsheet which shows respect and sympathy for Doherty by referring to him as Mr. Doherty. The editor of the broadsheet leaves the readers to make up their own mind about what they think of Doherty although they do use some premodifications such as "troubled" in order to create a feeling of sympathy towards this person. The editor then calls him a "former choirboy" in order to make readers feel that he is not a very negative character as choirboys are young boys who would sing in churches. ...read more.

In conclusion, both newspapers have some large and some small differences. In some cases, both newspapers may even agree with each other in some points. However we all know the main reason for the differences in things such as opinions, language, choice of pictures and the layout between these two papers. The main reason for the differences between these two papers is mainly because they are a tabloid and a broadsheet. Tabloids are aimed at local society who may want a newspaper that writes in informal English and presents reports of the local events happening. The tabloid is usually much more opinionated and based more on the opinions of the editor. The tabloid tries to attract the reader more by having a flashy headline and large flashy pictures and it is also much cheaper. The broad sheet however is aimed at serious people who usually want a newspaper that is very formal, reports events happening across the world, is unbiased, and is overall just presenting the information. The broadsheet is aimed at people who actually want to buy it. The tabloid newspapers try to lure people into buying them. We can see this as the broadsheets are usually much bigger and are sometimes more expensive but people still buy it, although it may be seen as a burden to carry around. Ismail Youssef ?? ?? ?? ?? Ismail Youssef 4238 10664 ...read more.