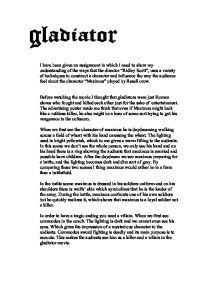 Gladiator - show how Ridley Scott uses a variety of techniques to construct a character and influence the way the audience feel about the character Maximus played by Resell crow.

I have been given an assignment in which I need to show my understanding of the ways that the director "Ridley Scott", uses a variety of techniques to construct a character and influence the way the audience feel about the character "Maximus" played by Resell crow. Before watching the movie I thought that gladiators were just Roman slaves who fought and killed each other just for the sake of entertainment. The advertising poster made me think that even if Maximus might look like a ruthless killer, he also might be a hero of some sort trying to get his vengeance in the coliseum. When we first see the character of maximus he is daydreaming walking across a field of wheat with his hand caressing the wheat. ...read more.

In the battle scene maximus is dressed in his soldiers uniform and on his shoulders there is wolfs' skin which symbolizes that he is the leader of the army. During the battle, maximus confronts one of his own soldiers but he quickly realizes it, which shows that maximus is a loyal soldier not a killer. In order to have a tragic ending you need a villain. When we first see commodos in the coach. The lighting is dark and we cannot even see his eyes. Which gives the impression of a mysterious character to the audients. Commodos sword fighting is deadly and its main purpose is to execute. This makes the audients see him as a killer and a villain in the gladiator movie. ...read more.

Then juba helps maximus by covering his wound. In the movie this is the first time we see maximus being helped by anyone. Before juba was a gladiator he was a hunter then he was sold to be a gladiator. Conclusion: In conclusion I think Ridley Scott presents the character of maximus as a tragic hero. Because in the beginning maximus is a loyal brave soldier and victorious in his battles. He could have been the emperor of Rome, but commodos had other plans and he ended up being the emperor Rome, even if it meant killing his own father. But I think the ending of the movie was just right even if maximus dies. Maximus had nothing else to live for his family was killed and he had his vengeance by killing commodos. So even if it was tragic it was the appropriate ending. ...read more.