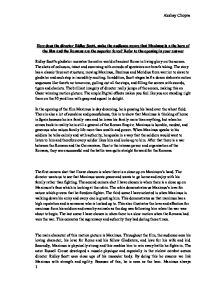 How does the director Ridley Scott, make the audience aware that Maximus is a the hero of the film and the Romans are the superior force? Refer to the opening in your answer

How does the director Ridley Scott, make the audience aware that Maximus is a the hero of the film and the Romans are the superior force? Refer to the opening in your answer Ridley Scott's gladiator recreates the entire world of ancient Rome in living glory on the screen. The shots of coliseum, intact and swarming with crowds of spectators are breath taking. The story has a classic three act structure, moving Maximus, Decimus and Meridius from warrior to slave to gladiator and each step is incredibly exciting. In addition, Scott stages half a dozen elaborate action sequences like there's no tomorrow, pulling out all the stops, and filling the screen with swords, tigers and chariots. The brilliant imagery of director really jumps of the screen, making this an Oscar winning motion picture. The ample Digital effects makes you feel like you are standing right there on the 50 yard line with gasp and squeal in delight. In the opening of the film Maximus is day dreaming, he is passing his hand over the wheat field. There is also a lot of sunshine and peacefulness, this is to show that Maximus is thinking of home in Spain because he is a family man and ...read more.

Throughout the film, the audience sees his loving character, his love for Rome and his fellow Gladiators, and love for his wife and kid. Secondly, Maximus is physically strong and this enables him to win every battle he fights in. The actor Russell Crowe developed a muscle physique and especially in the violent combat scenes director Ridley Scott uses close ups of his muscular body. By doing this he ensures we link Maximus with strength and agility. Because of this, he is seen as the hero. Maximus always "played the game fair". He never cheats to win. a match and his honesty is admired by the audience. Ridley Scott is able to show the audience in the cinema how to react; the more the crowd reacts to Maximus, the more we are encouraged to do the same. There are several other men in the film who we can compare Maximus to. Firstly, there is his main rival, Emperor Commodus. He is the complete opposite of Maximus. Although he could get away with being slightly good looking, Commodus lacks personality, of which Maximus has plenty. He is a very weak character with not much build and his voice is more like that of a child than a man as opposed to Maximus' much more deep and manly voice. ...read more.

An example of a speech given by Maximus is "If you find yourself alone riding in the green fields with the sun shining on your face do not be worried for we are already in a Elysium you are already dead." this gives the Roman Army confidence because this makes them feel brave and not frightened because they know they are fighting for the truth and integrity. . The director, Ridley Scott, is on the side of the Romans you know this because you can't understand what the German's are saying, but also during the battle there are no close-ups of the Germans. The director is a stereotype as he proves us that the Germans are uncivilised and they were barbarians. Maximus comes across a good leader in this picture even though he dies at the end because of his love for Rome, family and most importantly freedom. The beginning and the ending were linked well together as cornfield at the beginning represented his death in the end. In the end he dies feeling that his ambitions are accomplished and he has nothing to worry about. ?? ?? ?? ?? Akshay Chopra 1 ...read more.