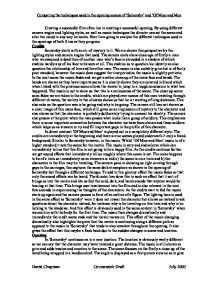 Here I am going to analyze the different techniques used in the openings of both films as they progress. Sommersby and Of Mice and Men

Creating a successful film often lies in creating a successful opening. By using different camera angles and lighting styles, as well as music techniques the director can set the scene and alter the mood in any way he wants. Here I am going to analyze the different techniques used in the openings of both films as they progress. Credits Somersby starts with an air of mystery to it. We are shown this perspective by the lighting styles and camera angles that used. The camera shots show close-ups of firstly a man who we assumed is dead then of another man who's face is shrouded in a shadow of which enables hardly any of his face to be seen at all. This enables as to question his identity an also question the relationship of him and the other man. The music is also suitably grim but is of fairly poor standard, however the music does suggest the time period as the music is slightly patriotic. In the next scene the music fades and we get another close up of the mans face and hands. The hands are shown as they have importance as it is clearly shown they are covered in blood which when linked with the previous scene allows the viewer to jump to a rough conclusion to what has happened. ...read more.

the characters in the film may be traveling. The camera pans in showing us light coming through gaps in the carriages, this captures the same dark atmosphere as shown in the opening of Somersby but through a different technique. To add to this gloomy effect the music fades so that only the sound effects can be heard. The director has done this to such an effect that it sort of brings us into the movie and lets us feel the cold, dark, and harsh sounds that anyone would be hearing at that time. This brings user involvement into the film and is also relevant in the next few seconds in experiencing the thoughts of the characters. As the credits start to fad the music starts up again and the camera pauses in front of an outline of a figure. The lighting here is used in the same effect as 'Somersby' were it does not reveal the character but allows us instead to ask questions about the character instead, for instance why is he traveling on this train and why is he lurking in the shadows. And this effect is obviously used in the same context in 'Somersby' when we see him with the body for the first time. ...read more.

'Of Mice and Men' once again changes to a different style. The music firstly has become more frantic and the scene first shows a women running. At this point she has no part in the story yet the camera follows her so that we know that it must link to the plot somehow. We are then shown to characters running away from the camera. Immediately this tells that because the woman was running toward the camera they are running away from each other. This type of camera work is not used at all in 'Somersby' as it tries to capture a different mood. However as the chase scene ends the same first person view as shown in Somersby is implemented to give us a clearer impression of the characters thoughts feelings at this time. To conclude it is obvious that both films implement similar styles however to get the correct mood they want they have often altered techniques to suit that scene creating the same sort of mood but in different ways. This kind of variation adds variety to the film and makes it much more enjoyable to watch. ?? ?? ?? ?? Comparing the techniques used in the opening scenes of 'Somersby' and 'Of Mice and Men David Chapman Coursework Draft July 2003 ...read more.