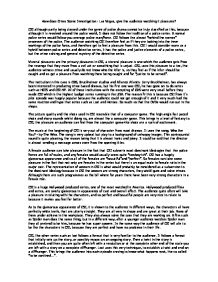 How does Crime Scene Investigation : Las Vegas, give the audience watching it pleasures?

How does Crime Scene Investigation : Las Vegas, give the audience watching it pleasures? CSI although partly being classed under the genre of police drama cannot be truly classified as this, because although it is revolved around the police world, It does not follow the tradition of a police series. A normal police series would follow you average police man/force. CSI follows the almost "behind the scenes" processes of the police. The audience watching CSI therefore feel as if they are looking into the inner workings of the police force, and therefore get to feel a pleasure from this. CSI i would consider more as a hybrid between police series and detective series, it has the police and justice elements of a police series, but the crime solving and general mystery of the detective series. Visceral pleasures are the primary pleasures in CSI, a visceral pleasure is one which the audience gets from the revenge that they crave from a evil act or something that is unjust. CSI, uses this pleasure to a tee, the audience witness crime and usually do not know who the killer is, so they feel as if the killer should be caught and so get a pleasure from watching them being caught and for "justice to be served". ...read more.

CSI although doesn't really continue throughout the series with cliffhangers, i does you twists in events within the story, almost like little cliffhangers throughout. Twists in the story, create an exciting enigma for the audience, the usual enigma at the beginning of CSI is the obvious; "who killed the victim" type question. But as each episode progresses it starts to unravel a mishmash of events (most of which are quite unlikely) that really get the audience thinking about who caused the murder and how it was caused, there is none of this Scooby Do type nature e.g. "it was the janitor all along". As for enigmas as mentioned above, they in themselves bring the audience into watching CSI, they make the audience ask questions usually that are set by the director at the beginning of a text, but are set throughout CSI, like many detective series. The audience will usually receive a pleasure from the questions that they want answered get answered. So for instance; CSI Las Vegas will always begin with a dead body that is found by a civilian or a body that has alrady been found and is set on the crime scene. ...read more.

Wanting the gadgets the audience are pleased by it because they really want to use the gadgets in CSI because of how fun it looks. The other reason would be wanting to use them for their use, in CSI using the gadgets helps the crime to be solved, and the audience wants to solve crimes and use their "skills" to "save the day". In conclusion i can very clearly identify that CSI offers many types of pleasures to an audience, a very fantasy driven out of this world exciting feeling, but also has a contrasting view, a view in which the audience can identify with the CSI because they see their private moments. The pleasure they receive from the perfect and glamorous life that the CSIs have that they themselves wished they had also is a big contributing factor of CSIs pleasures. The audience gets a final pleasure also in the gadgets that they use in CSI, that look fun to use and could help to save the day. So what pleasures does CSI bring to it's audience? Many is the answer, through a combination of gadgets, perfection of the characters, fantasy of the show and the private moments of the CSI. Word count: 2039 Luke Yates ...read more.