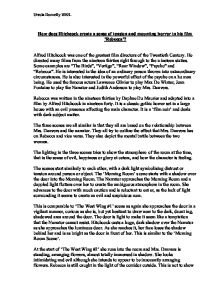 How does Hitchcock create a sense of tension and mounting horror in his film 'Rebecca'?

How does Hitchcock create a sense of tension and mounting horror in his film 'Rebecca'? Alfred Hitchcock was one of the greatest film directors of the Twentieth Century. He directed many films from the nineteen thirties right through to the nineteen sixties. Some examples are "The Birds", "Vertigo", "Rear Window", "Psycho" and "Rebecca". He is interested in the idea of an ordinary person thrown into extraordinary circumstances. He is also interested in the powerful effect of the psyche on a human being. He used the famous actors Lawrence Olivier to play Max De Winter, Joan Fontaine to play the Narrator and Judith Anderson to play Mrs. Danvers. Rebecca was written in the nineteen thirties by Daphne Du Maurier and adapted into a film by Alfred Hitchcock in nineteen forty. It is a classic gothic horror set in a large house with an evil presence affecting the main character. It is a 'film noir' and deals with dark subject matter. The three scenes are all similar in that they all are based on the relationship between Mrs. Danvers and the narrator. They all try to outline the effect that Mrs. ...read more.

De Winter has been dead for many years", Mrs. Danvers appears in front of her, her stern gaze piercing through Rebecca. It seems that Mrs. Danvers can materialize from nowhere when her presence is wanted least of all. During the 'West Wing #2' scene, Mrs. Danvers' eyes show her developing ideas when she looks towards the frantic, pathetic heap of fabric and netting on the bed where the Narrator lies in a trance, sobbing and shrieking. There is a headshot of Mrs. Danvers looks from the Narrator up towards the wide-open window and back towards the Narrator and she repeats this action once more and her eyes widen as ideas are gathering rapidly in her mind. The Narrator cannot see this but the viewer can because the camera follows her every move, glancing only at the Narrator occasionally. Mrs. Danvers' face becomes crazy and obsessed. She seems to live her life vicariously, living through Rebecca's spirit. She gazes at and strokes Rebecca's fur coats as though they are a symbol of worship. Constantly throughout the 'West Wing #1' scene the idea of Rebecca's status being much higher than the Narrator's and her presence being to the Narrator's even though she is dead, is continuously portrayed during this scene. ...read more.

She knows that the Narrator has no idea because she has no one to send letters to and wants to give her a real challenge of deciding what the dinner will be. Mrs. Danvers has purposely come to the Morning Room just to intimidate the Narrator. The scene ends with the Narrator frantically trying to hide a broken heirloom in the desk draw. Once again, the music is of long, lingering, high pitched, powerful notes to reach the pinnacle of tension in the scene. Without the first two scenes with the Narrator and Mrs. Danvers in, the 'West Wing #2' could not have happened. The first two scenes were vital in order to build up the relationship between the two women so that the full power of 'West Wing #2' can be shown. 'West Wing #1' scene creates tension slowly but it creates a great deal of it. However, 'West Wing #2' is a huge burst of tension all at once. It is so immense that you could hardly believe that two people could have such an effect on each other! I think that it is the prime example in the film of how Hitchcock creates a sense of tension and horror in this film. I believe it truly justifies Hitchcock one of the greatest directors of all time. Ursula Donnelly 10E/L ...read more.