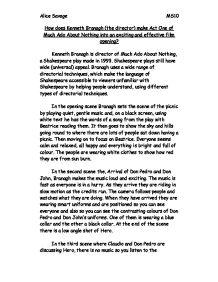 How does Kenneth Branagh (the director) make Act One of Much Ado About Nothing into an exciting and effective film opening?

How does Kenneth Branagh (the director) make Act One of Much Ado About Nothing into an exciting and effective film opening? Kenneth Branagh is director of Much Ado About Nothing, a Shakespeare play made in 1993. Shakespeare plays still have wide (universal) appeal. Branagh uses a wide range of directorial techniques, which make the language of Shakespeare accessible to viewers unfamiliar with Shakespeare by helping people understand, using different types of directorial techniques. In the opening scene Branagh sets the scene of the picnic by playing quiet, gentle music and, on a black screen, using white text he has the words of a song from the play with Beatrice reading them. ...read more.

One of them is wearing a blue collar and the other a black collar. At the end of the scene there is a low angle shot of Hero. In the third scene where Claudio and Don Pedro are discussing Hero, there is no music so you listen to the conversation easily. They are talking about love and you can also hear birds singing in the background, this is digenetic sound. As they are walking through the garden, the camera is in front of them watching them, the camera then moves behind them as they stop walking and stand in one spot. As they carry on talking to each other the camera does close ups of their faces so we can see their expression. ...read more.

In conclusion Branagh has made Act One of Much Ado About Nothing into an exciting and effective film opening by using music to show feelings and what people are like. This is effective because it draws people into the film by helping them to understand what is happening, so they don't need to worry as much about the Shakespearean language. I enjoyed the film because it showed the feelings of people very well and you don't need to worry about the language as much. All the points I have made through out this are reasons why it is an exciting and effective film opening but most important is the music as it helps you understand, it makes the film exciting as it shows you what other people are feeling. Alice Savage MS10 ...read more.