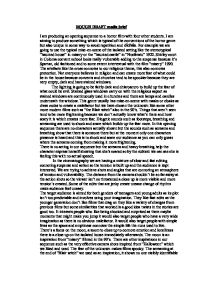 I am producing an opening sequence to a horror film with four other students. I am aiming to produce something which is typical of the conventions of the horror genre but also unique in some way to avoid repetition and clich&amp;eacute;s.

ROUGH DRAFT media brief I am producing an opening sequence to a horror film with four other students. I am aiming to produce something which is typical of the conventions of the horror genre but also unique in some way to avoid repetition and clich�s. For example we are going to use the typical mise-en-scene of the isolated setting like the stereotypical "haunted house" in misery or the "haunted castle" in "Nosferatu" 1922. Shirley court in Coloma convent school looks really vulnerable adding to the suspense because it's Spartan, old fashioned and to some extent intertextual with the film "misery" 1990. The artefacts like the cross connotes to our religious theme, this also connotes protection. Not everyone believes in religion and can create more fear of what could be in the house because convents and churches tend to be spookier because they are very empty, dark and have stained windows. ...read more.

There is no acting in our sequence but the screams and heavy breathing help the character express herself showing that she's scared so by the subtext we can see she is feeling this with no actual speech. In the cinematography we are having a mixture of slow and fast editing connoting suspense and action so the tension is built up and the audience is kept interested. We are trying to achieve shots and angles that are connoting an atmosphere of tension and vulnerability. The distance from the camera shouldn't be so far away at the action shots so the viewer isn't so threatened a close up is more visible and more tension's created. Some of the edits that are jerky create unease change of rhythm make audience feel uneasy. The target audience is aimed for both genders of teenagers and young adults as its plot isn't too predictable and involves using your imagination. ...read more.

The fear of the unknown makes films spooky. The screaming at the end of "Blair witch" we used as an inspiration, it shows no one visibly identifiable but movements and sounds are heard due to this the audience are able to use their imagination of who's in the house and of who the scream is coming from. My job in the group is the creative person. My main objective will be deciding on the music to match the generic conventions of the horror and theme of our story such as spooky music, clashing chords, eerie sounds to give it suspense and to build up the atmosphere. The diegetic sounds like screams, footsteps, and breathing are used to help build up the tension the sound gives the viewer an idea of what could be there. The inspiration of religious music was from "The candy man" an exorcist religious controversial theme. The spiritual side gave us an inspiration for the plot. ...read more.