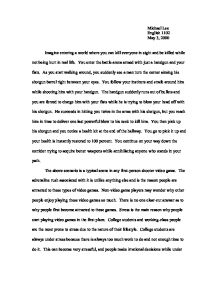 Imagine entering a world where you can kill everyone in sight and be killed while not being hurt in real life.

Michael Lee English 1102 May 3, 2000 Imagine entering a world where you can kill everyone in sight and be killed while not being hurt in real life. You enter the battle arena armed with just a handgun and your fists. As you start walking around, you suddenly see a man turn the corner aiming his shotgun barrel right between your eyes. You follow your instincts and strafe around him while shooting him with your handgun. The handgun suddenly runs out of bullets and you are forced to charge him with your fists while he is trying to blow your head off with his shotgun. He succeeds in hitting you twice in the arms with his shotgun, but you reach him in time to deliver one last powerful blow to his neck to kill him. You then pick up his shotgun and you notice a health kit at the end of the hallway. You go to pick it up and your health is instantly restored to 100 percent. You continue on your way down the corridor trying to acquire better weapons while annihilating anyone who stands in your path. The above scenario is a typical scene in any first-person shooter video game. The adrenaline rush associated with it is unlike anything else and is the reason people are attracted to these types of video games. Non-video game players may wonder why other people enjoy playing these video games so much. There is no one clear-cut answer as to why people first become attracted to these games. ...read more.

In high school, this student becomes involved in computer games and his grades drop significantly. He will not be able to attend a good college and companies won't view him as a good working prospect. This person won't receive the type of job he would otherwise have received if he had concentrated on school instead of video games. Although this example may seem a bit far-fetched, it really isn't that far from the truth. It has to be stressed that schoolwork should come before video games. Lee 4 Another bi-product of stress is aggression. These two always come hand-in-hand because they are both causes and effects of each other. Most people-especially men-don't know how to deal with stress without behaving more aggressively than normal. It is not uncommon to slam a fist against a wall or yell at an innocent near-by person while feeling stressed out. Not only do stress and aggression lead to an attraction to video games, but violence in video games also leads to aggression. It is a vicious cycle that gets worse and worse as the person spends more time on the computer. Aggression comes in many forms including short temper, cursing, and fighting. A report published in the Journal of Personality and Social Psychology in April 2000 positively links video games and violence. Based on two studies by researchers Craig A. Anderson and Karen E. Dill, the article claims that violent video games increase aggressive tendencies in the short term and can have long-lasting effects. ...read more.

The gaming industry has to start enforcing these ratings just as movie theatres enforce the movie-rating system. All of the past research studies on video game violence have turned up inconclusive results. Although the studies link video game violence and aggression, it is possible that aggressive people who get into more trouble prefer violent video games. Additional studies will need to be completed before we can claim that there is a demonstrated cause effect relationship between video game violence and real life aggression. However, the recent research developments show that the concern about the Lee 7 impact of violent video games is justified. It should act as a spur for both more research and for greater vigilance over the video and computer game diet of children. Lee 8 Works Consulted Anderson, Craig A. and Dill, Karen E. "Video Games and Aggressive Thoughts, Feelings, and Behavior in the Laboratory and in Life." Journal of Personality and Social Psychology. April 2000: v.78 n.4: 772. Ballard, Mary E. and Lineberger, Robert. "Video game violence and confederate gender: Effects on reward and punishment given by college males." s*x Roles. Oct. 1999. V.41 n.7-8: 541-58 Curley, Anne. "Senator Decries Violent Video Games." CNN Allpolitics. 25 Nov. 1995. <http://europe.cnn.com/ALLPOLITICS/1997/11/25/email/videos> Gross, Alan M., et al. "Cognitive Temp, Violent Video Games, and Aggressive Behavior in Young Boys." Journal of Family Violence. Sep. 1995: v.10 n.3: 337-50. 1998 Video and Computer Game Report Card. David A. Walsh, Ph.D. National Institute on Media and the Family. < http://www.mediaandthefamily.org/1998vgrc2.html> Why Do Kids Kill?. Jon Katz, First Amendment Center Scholar. 23 April 1999. <http://www.freedomforum.org/technology/1999/4/23katz. ...read more.