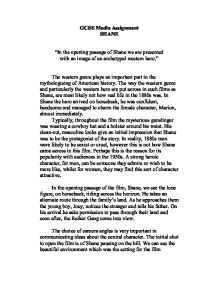 &quot;In the opening passage of Shane we are presented with an image of an archetypal western hero&quot; - Discuss.

GCSE Media Assignment SHANE "In the opening passage of Shane we are presented with an image of an archetypal western hero." The western genre plays an important part in the mythologising of American history. The way the western genre and particularly the western hero are put across in such films as Shane, are most likely not how real life in the 1880s was. In Shane the hero arrived on horseback, he was confident, handsome and managed to charm the female character, Marion, almost immediately. Typically, throughout the film the mysterious gunslinger was wearing a cowboy hat and a holster around his waist. His clean-cut, masculine looks give an initial impression that Shane was to be the protagonist of the story. In reality, 1880s men were likely to be sexist or cruel, however this is not how Shane came across in this film. Perhaps this is the reason for its popularity with audiences in the 1950s. A strong heroic character, for men, can be someone they admire or wish to be more like, whilst for women, they may find this sort of character attractive. ...read more.

The shot is a close up of Shane, however the difference in levels appears to give Shane authority over them, which is how he is perceived throughout the film. He smiles at Joey and compliments him on his attentiveness, "You were watching me down the trail quite a spell, weren't ya?...Y'know...I like a man who watches things going on around, means he'll make his mark someday." This is the moment we first recognise that Shane has an able way with children and from here he builds a good friendship with Joey. Similar to the last, the next is a low angle shot looking up at Shane, giving him the higher status in this scene. This time attention is drawn to the clouds behind, which makes him appear almost angelic. The filmmakers used the dialogue to build a clear image of Shane's character and the heroic qualities he possesses. Shane's opening line, "You don't mind me cutting through your place?" shows the stranger is respectful and courteous, as many in Shane's position would have disregarded the family and cut straight through. ...read more.

The Reiker Gang arrive abruptly and immediately the atmosphere of the scene changes. We see their horses trample over Joe's garden, threatening and intimidating the family as the music turns sinister. This gives the audience a poor impression from the first encounter. The Gang appears scruffy and their characters are only emphasised by their husky voices aswell as their age. Even their facial hair is the complete antithesis of what Shane stands for. These are the ways the filmmakers succeed in manipulating the audience's perceptions of the characters, and all contribute to the idea of the contrast between good and evil in the story. "In the opening passage of the film, Shane we are presented with an image of the archetypal western hero" After exploring the techniques used to create Shane's character, I do agree with this statement. Shane was first introduced at the beginning of the film as the heroic character and managed to maintain his authoritative figure throughout. The filmmakers used devices which would give immediate impressions of certain characters. Music, appearance and even dialogue created an original persona for each of them and in the case of Shane's character, presented him as the classic western hero. ...read more.