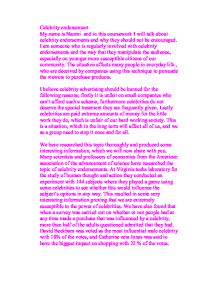 Celebrity endorsement My name is Naomi and in this coursework I will talk about celebrity endorsements and why they should not be encouraged. I am someone who is regularly involved with celebrity endorsements and the way that they manipulate the audience, especially on younger more susceptible citizens of our community. The situation affects many people in everyday life , who are deceived by companies using this technique to persuade the viewers to purchase products. I believe celebrity advertising should be banned for the following reasons; firstly it is unfair on small companies who can't afford such a scheme, furthermore celebrities do not deserve the special treatment they are frequently given. ...read more.

At Virginia techs laboratory for the study of human thought and action they conducted an experiment with 144 subjects where they played a game using some celebrities to see whether this would influence the subject's options in any way. This resulted in some very interesting information proving that we are extremely susceptible to the power of celebrities. We have also found that when a survey was carried out on whether or not people had at any time made a purchase that was influenced by a celebrity, more than half of the adults questioned admitted that they had. David Beckham was voted as the most influential male celebrity with 18% of the votes, and Catherine zeta Jones was said to have the biggest impact on shopping with 22 % of the votes. ...read more.

I totally disagree with these obscure suggestions and think that these people are simply uncaring business tycoons. Furthermore they do no care whether they are cheating our citizens of hard earned money by using idols to influence them. Finally I hope that you will take my views into account and next time you view one of these offending adverts make sure that you are not fooled into purchasing an unworthy position. Furthermore, another issue is that many vulnerable children will watch these adverts in the media and feel pressurised into idolising and copying the celebrities. An example is if a child see a celebrity eating from a fast food shop, they will also want to eat there, consequently sacrificing their health and weight. . ...read more.