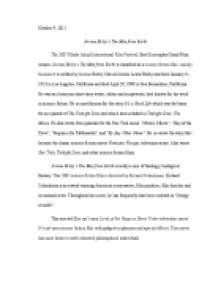 Jerome Bixbys The Man from Earth is really a mix of theology, biological fantasy. This 2007 science fiction film is directed by Richard Schenkman

﻿October 9, 2012 Jerome Bixby?s The Man from Earth The 2007 Rhode Island International Film Festival, Best Screenplay Grand Prize winner, Jerome Bixby?s The Man from Earth is classified as a science fiction film, mainly because it is written by Jerome Bixby. Drexel Jerome Lewis Bixby was born January 11, 1923 in Los Angeles, California and died April 28, 1998 in San Bernardino, California. He was an American short story writer, editor and scriptwriter, best known for his work in science fiction. He is most famous for the story It's a Good Life which was the basis for an episode of The Twilight Zone and which was included in Twilight Zone: The Movie. He also wrote four episodes for the Star Trek series: "Mirror, Mirror", "Day of the Dove", "Requiem for Methuselah", and "By Any Other Name". ...read more.

an anthropologist Sandy (Annika Peterson), a historian who is in love with John, Dr. Will Gruber (Richard Riehle), a psychiatrist, Art (William Katt), an archaeologist; and his student Linda (Alexis Thorpe). John Oldman (David Lee Smith), resigned after ten years at a university, to his colleague's surprise, he packs up and move because ?He has itchy feet.? Curious as to why he's leaving, they beg him for answers, they were not ready for. This leads to a story they can?t believe, or disprove. Is he really 14,000 years old? Was he a caveman? Did he meet Buddha? Was he the man we now know as Jesus? Jerome Bixby?s The Man from Earth is cleverly written with campfire like pace full of metaphors. This movie was well researched, answering many question about history, religion and humanity. ...read more.

This very much pulls you in to the screen as if you were there. As you watch Jerome Bixby?s The Man from Earth it make you ask yourself, is this a true what John is saying, could it actually be a real person out he that just stop ageing? This is mainly because they don?t flashback to events that John is mentioning giving you the ideal that ok what he is saying somewhat true, that he is not crazy. That would have just ruined the whole film. But anyone interested in a movies as a carrier of ideas. That would start an arguments in any setting will find Jerome Bixby?s The Man from Earth fascinating. Smith is wonderfully mysterious as John. The story that he unfolds is so believable. This film is shot in the evening in real time for a great effect. It's as if you are at the party but, ?bring your own roast toasties and Johnny Walker Green Label.? ...read more.