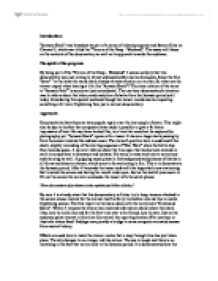 &quot;Jurassic Shark&quot; was broadcast as part of a series of related programs and feature films on Channel 5, which was titled the &quot;Terrors of the Deep - Weekend&quot;. This essay will focus on the contents of the documentary

Introduction: "Jurassic Shark" was broadcast as part of a series of related programs and feature films on Channel 5, which was titled the "Terrors of the Deep - Weekend". This essay will focus on the contents of the documentary as well as its approach towards the audience. The spirit of the program: By being part of the "Terrors of the Deep - Weekend" it seems unlikely that this documentary was just aiming to attract unbiased hobby-marine-biologists. Since the film "Jaws" 1 at the latest the word shark already attracts attention on its own. So what can the viewer expect when hearing a title like "Jurassic Shark"? The close relation of the name to "Jurassic Park"2 is surely not just coincidental. The one-hour documentary's intention was to inform about the history and evolution of sharks from the Jurassic period until today. Considering this special weekend though the viewer would also be expecting something a bit more frightening than just a normal documentary. Approach: Documentaries have become very popular again over the lost couple of years. This might also be due to the fact that computers have made it possible to give a far better impression of how life may have looked like, in a time that could not be captured by photography yet. ...read more.

The expression "painted a picture" seems to well describe the following scenes. The fish are all very colourful and appear in strange looking shapes. At this stage the first commercial block sets in. After a short break the documentary continues. We are now introduced to the s*x life of sharks. Very impressive long shots of their mating habits accompany the narrator who informs us about the different ways, that sharks breed. Unusual for the rest of the documentary, it nearly takes up ten minutes of time. Beautifully filmed scenes of Manta Rays who also belong to the shark family follow this. As we are approaching half time of the broadcast the danger of loosing potential viewers increases. "Jurassic Shark" has dealt with this problem in the most obvious way. It is now time for the Tiger Shark - one of the most dangerous of all. The narrator introduces him as a fish "that eats anything, from floating rubbish to people". Again, with the help of very impressive footage, the shark's preying on albatross fledglings is demonstrated. To top this we are now becoming the spectators of a real drama. A female turtle is shown in close-up as she exhaustedly lies on the beach after breading. Meanwhile the narrator has initiated the viewer into the fact that a Tiger Shark is waiting nearby in shallow water. ...read more.

The photography was very impressive throughout the film and a lot of effort was presumably taken when creating the animation. What lowers the quality though is the way the sharks are presented. The sentence "from the monsters of pre-history to the sophisticated killers of today" already says it all. Sharks are still seen as monsters and killers. Not one word was said about the dangers that their extinction would cause to the marine ecosystem if we carry on killing these fish. Referring to the section about the Whale Shark, the program also fails to report about the rareness of these creatures and their brutal slaughtering. Although under conservation the killing still continues in order to provide a mythical cure for the increasingly fading virility of mostly Asian customers. The way particular scenes (like the one with the turtle) are put together in connection with some of the narrator's comments actually do support the widely spread opinion that sharks are mindless killing machines. Finally 1 want to say that, although the thought behind this documentary was most possibly to educate about sharks in order to take our natural fear of them, it did not really achieve this goal. The facts were interesting but for someone scared of sharks this documentary did not reduce but rather increase it. Notes 1 "Jaws"; Universal Pictures; 1975 2 "Jurassic Park" ; Universal Pictures; 1993 ...read more.