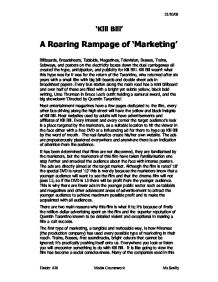 'Kill Bill' A Roaring Rampage of 'Marketing' Billboards, Broadsheets, Tabloids, Magazines, Television, Busses, Trains, Subways, and posters on the electricity boxes down the dual carriageway all created the hype, anticipation, and publicity for Kill Bill. Kill Bill wasn't what this hype was for it was for the return of the Tarantino, who returned after six years with a small film with big bill-boards and double sheet ads in broadsheet papers. Every bus station along the main road has a mini billboard and over half of these are filled with a bright yet subtle yellow, black bold writing, Uma Thurman in Bruce Lee's outfit holding a samurai sword, and the big showdown 'Directed by Quentin Tarantino'. Most entertainment magazines have a few pages dedicated to the film, every other bus driving along the high street will have the yellow and black insignia of Kill Bill. Most websites used by adults will have advertisements and affiliates of Kill Bill. Every interest and every corner the target audience's look is a place targeted by the marketers, as a suitable location to hit the viewer in the face either with a free DVD or a influencing ad for them to hype up Kill Bill by the word of mouth. ...read more.

There are two main reasons why this film is what it is; it's because of firstly the million-dollar advertising spent on the film and the superior reputation of Quentin Tarantino known to be detailed violent and exceptional in making a film a cult success. The first type of marketing, a tangible and noticeable way, is how Miramax (the production company) has used every possible type of marketing in their reach. Trains, Busses, free soundtracks, bright colours that cannot be ignored; it's practically pushing itself onto us. Everywhere you look or listen you will encounter something to do with Kill Bill. It is like going to view the film has become a social consciousness. Many of the companies used in this marketing are sub-companies of Miramax. For example, Disney owns The Times Newspaper, an admirer of the film, who gave away a free DVD, and Disney also owns Miramax, there are many links like these in between the advertising companies used. The second type of marketing, an intangible and less noticeable one, is the sampling done by Tarantino, known to be a DJ artist in films. ...read more.

amongst most adults), have resulted in effective success in building hype greater and greater till the big releasing on the release date that shatters the hype, and the public reviews carry on from there. The marketing effectively reminds the audience of the film everyday and creates anticipation inadvertently. The marketing has lived up to Tarantino's respected reputation. It has made itself a hit without any critical or public reviews, which's an admirable achievement in marketing. It has effectively manipulated the audience to go and see the film. It has conveyed the message to the audience that it is the film of the year, a must see, it has marketed Kill Bill fruitfully. I believe that marketing in this way by having an image of the Kill Bill poster in front of you everyday (in the paper you read, on the bus in front you in the traffic, etc...) is morally wrong, as it is a form of repetitive manipulation, but authentically the marketers have done what is needed to be done to make much profit as possible. Accordingly Kill Bill is a sell-out. 21/10/03 Haider Alli Media Coursework Ms Scally ...read more.