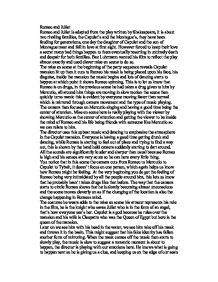 Romeo and Juliet Romeo and Juliet is adapted from the play written by Shakespeare, it is about two rivaling families, the Capulet's and the Montague's, they have been feuding for generations, one day the daughter of Capulet and the son of Montague meet and fall in love at first sight. However forced to keep their love a secret many bad things happen to them eventually resorting in untimely death and despair for both families. Baz Luhrmann wanted his film to reflect the play almost exactly and used clever mise en scene to do so. The mise en scene at the beginning of the party sequence reveals Capulet mansion lit up then it cuts to Romeo his mask is being placed upon his face, his disguise, inside the mansion the music begins and lots of dancing starts to happen at which point it shows Romeo spinning. This is to let us know that Romeo is on drugs, in the previous scene he had taken a drug given to him by Mercutio, all around him things are moving in slow motion the scene then quickly turns manic this is evident by everyone moving faster than normal which is mirrored through camera movement and the type of music playing. ...read more.

Capulet is a god because he rules over the mansion and his wife is Cleopatra who was the Queen of Egypt but here is the queen of the mansion. Later on we see him with his head in the water, we see him take off his mask and throws it in the basin. This might suggest that his fake identity has fallen another form of mirroring. When the mask comes off the music then starts to slowly play, the music is slow to suggest a romantic moment is about to happen, the director is playing with our emotions here. He knows what is going to happen next so he is giving us a clue, and keeping us on the edge of our seats constantly. The music soothes Romeo as he takes in everything around him everyone else also becomes still and quiet taking in the beauty of the song. It also reflects the mood of Romeo he is quite sultry and so the music is added to compliment this, it is a score about that first moment kissing someone, this is key to the sequence as later on we see Romeo and Juliet kissing in the elevator. ...read more.

This is very clever because it takes us out of our romantic trance and back to the real world where we know that Romeo and Juliet cannot be together. When the nurse and Juliet are rushing back to the party Romeo rushes after them. This is reflected in the camera movement as it has gone from moving slowly and smoothly to rough and fast. Neither the camera nor the characters stop moving till Juliet is forced to dance with Paris. Her mother who is the one forcing her to dance is now pleased that she has gained some control over her daughter. Paris is wearing an astronaughts costume this could quite easily suggest that he thinks very highly of himself. When they start dancing the camera becomes still again and the music lowers back down, this is so we can focus on the couple dancing, we know that Juliet is not interested in Paris which makes this shot even more interesting. This scene has the potential to be romantic but is deliberately interrupted by Mercutio insisting that Romeo leaves. ...read more.