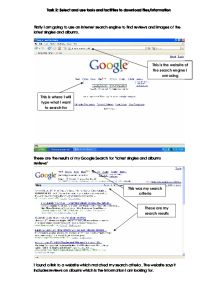 Task 2: Select and use tools and facilities to download files/information Firstly I am going to use an internet search engine to find reviews and images of the latest singles and albums. These are the results of my Google Search for 'latest singles and albums reviews' I found a link to a website which matched my search criteria. The website says it includes reviews on albums which is the information I am looking for. This is the homepage of the website I have chosen 'www.albumvote.co.uk' I will use this website to find album reviews and locate images of the album. In the search box I typed in an album I wanted the review on in this case it was 'Hot Fuss' an album by The Killers These are the results of my search and the page I was looking for is the first result. This is the page on albumvote.co.uk which has information about the album 'Hot Fuss' by The Killers. This is my first review on 'Hot Fuss' by The Killers, the review and image are from www.albumvote.co.uk. 'To me this is a great new album, although the 1980's undertones are obvious, the killers have at last provided a rejuvenated form of 80's rock, with a certain extra humph lacking in much of both the 80's and latest rock bands. ...read more.

Truly, you'll never hear a more irritating record.' By Dan Gennoe 'To think that Dave Grohl used to be such a nice chap. Always fun, always smiling, always ready with a comedy video and a little something to hum along to. Truth be told, there's always been a great songwriter lurking just behind the Foo Fighter frontman's disarming grin, but with new album, "Echoes, Silence, Patience And Grace", Grohl has stopped apologising for it, keeping the nods and winks to a minimum and letting out the thinker within. As a first single, "The Pretender" neatly sums up his new found confidence. Another instant stadium screamer of the "All My Life", "Stacked Actors" mould, it pins Grohl's tried and tested melancholic hope to a crowd surfing riot of pile driving riffs and crashing cymbals, just as he's done a hundred times before. All that's missing is the punch line. For once there's no glint in the eye, just a genuine sadness and pent-up rage as they barrel through the perfect clenched fist anthem to complete a transition from the drummer from Nirvana's hobby project to the biggest rock band going.' By Dan Gennoe I will now look at the trustworthiness/validity and date of my sources. ...read more.

It's happened more than once in my life, but the one that's most noted is Kurt." Grohl added: "There are a lot of people that I've been angry with in my life, but the one that's most noted is Courtney. So it's pretty obvious to me that those correlations are gonna pop up every now and again." The new Foo Fighters album, 'Echoes, Silence, Patience & Grace', is set for release on September 25. Kanye West thrills at Emmy afterparty He rolls out the hits for a star-studded crowd Kanye West was the highlight of a post Emmy Awards bash held at Hollywood's Les Deux last night (September 16). A celebrity-filled audience rushed the stage when the rapper began his set at the TV Guide party. West performed a short set that included his 2005 hit 'Gold Digger' and saw him jumping on top of giant speakers. He worked up the crowd, getting them to shout "h**l yeah!" and "Kan-ye!" reports the Associated Press. Earlier in the evening, West appeared in a short skit on the Emmy Awards with actor Rainn Wilson, where he spoofed himself and made fun of the fact that he went home from last week's MTV Video Music Awards empty-handed. List Of Websites I have Used: * Google.co.uk * Albumvote.co.uk * Music.yahoo.com * Bbc.co.uk * Nme.com Task 2 Is Now Complete ...read more.