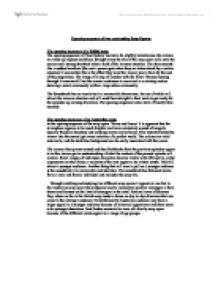 Opening sequence of two contrasting Soap Operas The opening sequence of a British soap The opening sequence of 'East Enders' seems to be slightly monotonous, the colours are made up of greys and blues. Straight away the title of the soap opera rolls onto the screen and a strong drumbeat takes a hold of the viewers attention. The drum sounds like a sudden heartbeat (the sort a person gets when they are taken aback by a certain situation) it seems that this is the effect they want the viewer you to have by the end of the programme. The image of a map of London with the River Thames running through it remains still but the camera continues to zoom out in a rotating motion showing a small community within a large urban community. The Soundtrack has no vocals but is a memorable theme tune. Its one of which will attract the viewers attention and will send them straight to their seats to get ready for the episodes up-coming dilemmas. ...read more.

Through watching and studying two different soap operas it appears to me that in the Australian soap opera the producers tend to incorporate positive messages in their shows and focuses on the lives of teenagers in the small fictional town of Summer Bay, where-as the in the British soap tends to focus on day-to-day dilemmas that can occur to the average Londoner. Nevertheless the Australian audience may have a larger appeal to a younger audience because of its surreal appearance and there seem to be younger characters. East Enders seems to be more of a family soap opera because of the different events appeal to a range of age groups. Soap Operas GCSE Coursework Assignment Television is becoming an increasingly important part of society. We have more televisions in our homes, and on those televisions there are more soap operas for the viewing public for example, East Enders, Coronation Street, Emmerdale, Neighbours, Home and Away, Brookside and Hollyoaks. Soap operas have become a modern day phenomenon. ...read more.

Unlike today, soaps weren't shown as television dramas for long periods of time (1 hour 1/2 hour shows), they were short radio drama serials, which dealt with ordinary life. Soap companies eager to establish themselves in the new post-war prosperity sponsored these short drama serials. This is how the evolution of soaps transferred into the growing medium of television. Soap operas have developed ideas, which have proved successful in the cinema technique that makes the viewer determined to watch the next episode. Melodramatic scenes are predominantly evident in the extended episodes of soaps such as, emotional and sentimental stories essentially about love. Music also plays a great role in soap opera episodes. Music in Soap operas is usually used to intensify the sense of emotion. Soap operas today have proved to be very successful. Soaps such as Hollyoakes, Eastenders and Coronation Street are just three out of a list of many popular soap operas. It seems that soap operas will still be around within many years to come, with the new, over exaggerated and extreme story lines that have our society glued to our seats watching whichever soap opera appeals to us the most. ...read more.