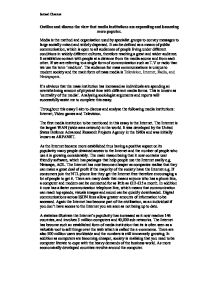 Outline and discuss the view that media institutions are expanding and becoming more popular.

Outline and discuss the view that media institutions are expanding and becoming more popular. Media is the method and organisation used by specialist groups to convey messages to large socially mixed and widely dispersed. It can be defined as a means of public communication, which is open to all audiences of people living under different conditions in widely different cultures, therefore reaching a great and wider audience. It establishes contact with people at a distance from the media source and from each other. If we are referring to a single form of communication such as T.V or radio than we use the term 'medium'. The audience for mass communications is unique to modern society and the main form of mass media is Television, Internet, Radio, and Newspapers. It's obvious that the mass institution has increased as individuals are spending an overwhelming amount of physical time with different media forms. This is known as 'centrality of the media'. Analysing sociologist arguments and reports will successfully assist me to complete this essay. Throughout this essay I aim to discuss and analyse the following media institutions: Internet, Video games and Television. The first media institution to be mentioned in this essay is the Internet. ...read more.

Information will be the property of everyone and we will have access to everything. Most importantly it will reduce the importance of characteristic skin colour, gender physical attraction and sexual orientation will no longer be important in the virtual would of the Internet. Everyone will be viewed as equal. The second media institution is video games. Video games can be played on several types of platforms: home consoles used with TV sets, computers, and computers with access to the Internet, coin-operated arcade machines, and handheld devices including games systems, cell phones and Palm Pilots. In the past these electronically products were not available highlighting the fact that they have become developed and more poplar. Atari introduced video games in 1972; this was a ping pong game. Nintendo introduced hardware in 1986 and it is estimated that over 4 billion pounds has been created through them selling games. Other companies that are involved in producing games are Sony, Microsoft and Saga. As fashion and taste changes, so does the video games, and many companies try to change the correct theme of their games e.g. at the beginning of the football season a football game becomes popular e.g. Fifa 2004. ...read more.

This can be emphasised by an important factor in T.V, commercials (advertising). Women have the traditional domestic role in the household, as they tend to show how to use the vacuum cleaner or what kitchen appliance the consumer should purchase e.g. cooker. This is significantly clear that this would be targeted towards the female audience, as this is how western society operates, women tend to do most of the domestic duties. Products aimed at men involve women as being sex objects e.g. Lynx 'the Lynx effect'. The advantage of TV is that we can get a wider perspective of the knowledge world wide society learns about different cultures such as religion music, food, clothing etc. Also we are quickly entertained from the comfort of our homes In conclusion, I believe that the media institution is gaining power and will come to eventually directing and determining the culture of society rather than respond to or reflect society culture. Overall sociologist believe that the mass media is increasingly becoming more popular as the term 'meditation' describes this process of mass recognition. The media has begun to replace our local knowledge and awareness. This suggests that the media has become very popular and important in society lives due to the fact that they have replaced community-based forms of social and cultural life. Jamaal Channer ...read more.