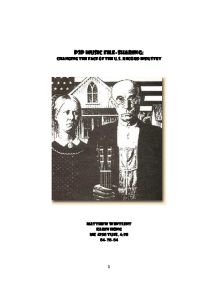 P2P music file-sharing: Changing the face of the U.S. record industry Matthew Wentlent Karin Hong Mk 4200 Tues. 4:30 04-30-04 Executive Summary With the introduction of Napster, the first P2P network, the music industry has been experiencing some major changes. Through the past five years, P2P file sharing has been gaining popularity as a medium to download music. Since the onset of P2P file sharing, record companies have experienced a steady decrease in album sales. For that reason, we have decided to concentrate our marketing research effort on finding out the main factors that have influenced this change from traditional retailing to individual file sharing. Because of the purpose of the study, we outlined the following objectives to be completed: (1) define the attractive characteristics of file sharing over purchasing music from traditional means; (2) discern how widespread file sharing is and pin-point the chief users; and (3) assess possible strategies that music companies can use to utilize the Internet, increasing profits through innovative means. It was decided that evaluation of features of P2P downloading was a major aspect to study. Our questions focused on the valuable attributes of P2P, such as cost, variety, and availability. We also tried to pin-point the genres of music most frequently downloaded. Furthermore, we offered possible strategies as a means to gauge the possibility for record companies to use the Internet to make up for lost revenue. We also expanded our research to include the recent legal actions of the music industry against the users of P2P. Once our purpose was clearly defined, we prepared an 18-question survey that was distributed randomly to 75 individuals age 18-27. We then collected the data and inputted it into SPSS for analysis. With SPSS software, we ran a variety of tests to reach our defined goals, including frequencies, descriptives, Analysis of variance (ANOVA), independent t-tests, one-sample t-tests, cross-tab/chi-square and correlations. ...read more.

Yes No 3.87 3.36 .267 The results indicate that there is no significant difference between people who use P2P and people who do not use P2P on the likelihood of buying files if certain special benefits were offered. Maximum Amount Willing to Pay for Unlimited Downloads and Single Tracks: Descriptives and ANOVA Respondents were asked if they were willing to pay a monthly fee for unlimited downloads. Those that indicated "Yes" were then asked to state in dollars the maximum price they would pay for this kind of service. Of the 75 total people that were polled, approximately 69% of the respondents stated they were willing to pay a monthly fee for unlimited downloads. The maximum price for this service ranged from $1.00-$30.00 with the average amount being about $13.00. Analysis of variance was used (ANOVA) to compare means across different before tax annual household income levels and the maximum amount willing to pay for monthly unlimited downloads. The results show that there is no difference between various income groups and the maximum amount people are willing to pay for monthly downloads. Respondents were also asked if they were willing to purchase single track downloads. This time, only 29% of the respondents said "Yes" to purchasing single track downloads. The maximum price people said they would pay for each individual track ranged from $0.01 to $5.00. The average price for each track was $0.99. Unfortunately not enough people responded Again, ANOVA testing was used to determine the variation of means for prices and various income groups. However, because there were far too few respondents, a proper ANOVA analysis could not be conducted. Method of Obtaining New Music: One Sample T-Test and Pearson Product Moment Correlation The respondents were asked to describe their current habits of obtaining new music. The following statements were given: 1.) When I want new music I usually download it using peer-to-peer software. ...read more.

However, a majority of respondents stated that this is an attractive benefit that could be offered. There are two aspects two consider here. - The range of maximum per month payment varied greatly. However, the range being $13.00, we recommend a $15.00 fee for monthly usage. However, companies should not offer their entire catalog through these services considering a number of individuals still purchase music from traditional retail outlets. The online network should be viewed as a supplementary source rather than a primary. However, it is a way of minimizing costs, as the production side merges with the production. Also, concentrate on new music, specifically popular genres such as rock, rap, or techno. You could offer 3 to 4 tracks from a new album as a promotional tool. - Since a majority of people are now using faster connection, i.e. DSL, a partnership could be formed with the ISPs to offer downloadable music to customers of their services. Offering integrated packages for high-speed services, like AOL Broadband, may help in reaching people who do not think of the Internet as a viable medium for music purchase. In addition On top of these strategies to utilize the Internet, it would be helpful to reassess previous policies on business conduct. The profit margin for a c.d. is rather large in comparison to most products. It would be prudent to lower the overall cost to the retailer. After all, a significant reason why people use P2P programs is because it is free of cost. If more consumers were faced with reduced prices at the traditional retail stores, it would deter some light users, and thrust them back into the main stream of the marketing channel. All of these strategies recommended are sound. Being based on careful research of the issue, it would unwise to ignore them. The entire music industry is in transition; these strategies will help ensure survival through the upheaval. It is in the nature of business to be dynamic, and the company that reacts swiftly will ensure their market share for the long-run. 1 ...read more.