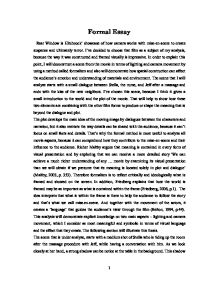 Rear Window is Hitchcock showcase of how camera works with mise-en-scene to create suspense and ultimately terror. Ive decided to choose that film as a subject of my analysis, because the way it was constructed and framed visually is impressive.

Formal Essay Rear Window is Hitchcock' showcase of how camera works with mise-en-scene to create suspense and ultimately terror. I've decided to choose that film as a subject of my analysis, because the way it was constructed and framed visually is impressive. In order to explain this point, I will deconstruct a scene from the movie in terms of lighting and camera movement by using a method called formalism and also will demonstrate how spatial construction can affect the audience's emotion and understanding of materials and environment. The scene that I will analyze starts with a small dialogue between Stella, the nurse, and Jeff after a massage and ends with the kiss of the new neighbors. I've chosen this scene, because I think it gives a small introduction to the world and the plot of the movie. That will help to show how these two elements are combining with the other film forms to produce or shape the meaning that is beyond the dialogue and plot. The plot develops the main idea of the moving image by dialogues between the characters and narration, but it also restricts the way details can be shared with the audience, because it can't focus on small facts and details. That's why the formal method is most useful to analyze all movie aspects, because it can comprehend how they contribute to the mise-en-scene and their influence to the audience. ...read more.

In the next frame the woman moves from the bed to the chair to get the hat, her strong shadow disappears, because that part of the room has two more lights - filling light and backlight. The filling light is used to eliminate the strong shadows created by the key light, so that makes it less bright than the key light. And the backlight in this scene, is used to create the contrast between the character and the background, so it makes the audience see Stella not as one with the set, but more like three dimensional. So the difference in the exposures of the subjects gives the room more depth and keeps the natural look, but also helps to maintain the feeling of space for the audience. For this period of filmmaking, Bordwell and Thompson introduce that as three point lighting in the following quote. 'Classical Hollywood filmmaking developed the custom of using at least three light sources per shot' (Bordwell and Thompson, 2004, p. 194). The next shot reveals Jeff sitting on his chair as he speaks, as a medium close-up shot. The light which illuminates him well emphasizes on the expressivity on his face and constructs more depth as it makes it look more conventional and realistic for the audience. Three point lighting creates balanced illumination that affects the view of the audience by shaping the object and its texture in the space that it is. ...read more.

A fast tilt camera movement frames the shot for seconds by focusing on the action of the characters. And here the same authors present the term tilt movement as a vertical motion of the camera (Bordwell and Thompson, 2004, p. 267). This process of creating the realism of their conversation relies not only on the camera, but also on the actors. As we see through the scene, they maintain the visual contact even when they were off camera and that's what improves the realistic or conventional look of these shots. After Jeff ends the conversation with her, she leaves the room and the camera moves and zooms to emphasize the character and to make the audience more concentrated on his action. The next frame shows his neighbor going inside the building. As we look at that image, we see everything but the slightly blurred window frame and the high angle that is used for the camera to create the view of the character. Followed by a medium close up of Jeff moving his eyes to another direction as he's seeing another image. The image of the woman who is sitting on a chair and sun bathing with a newspaper on her face. All these images are there to create the atmosphere of the neighborhood that Jeff lives in and by providing them in this particular way, Hitchcock wants the viewer to see through the eyes of Jeff, to live through the story and to be him. Reference List ?? ?? ?? ?? 1 ...read more.