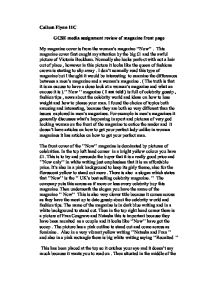 Callum Flynn 11C GCSE media assignment review of magazine front page My magazine cover is from the woman's magazine ''Now'' . This magazine cover first caught my attention by the big �1 and the awful picture of Victoria Beckham. Normally she looks perfect with not a hair out of place , however in this picture it looks like the queen of fashions crown is starting to slip away . I don't normally read this type of magazine but I thought it would be interesting to examine the differences between a men's magazine and a woman's magazine . ( The truth is that it is an excuse to have a close look at a woman's magazine and what an excuse it is ).'' Now '' magazine ( I am told ) is full of celebrity gossip , fashion tips , news about the celebrity world and ideas on how to lose weight and how to please your man. I found the choice of topics both amusing and interesting, because they are both so very different than the issues explored in men's magazines. ...read more.

Then you have a picture of Natasha and Fran who broke up but have a baby together but have now been reunited with each other . This will appeal to all woman who are single mothers and people who have split up that want to get back together and that they don't think that it will ever work out, also for woman who love a happy ending. Finally the last three pictures will interest the audience because woman think that plastic surgery and make up will make them look better but not in these cases . In my opinion the pictures have the most impact because of the colours that have been used because it makes the magazine to life . The words to the picture ratio is probably 11:3. So for every 11 words there is 3 pictures. I know that this magazine is definitely for girls because it has girly colours , like bright pink and vibrant yellow which are feminine colours. You can identify its genre as a gossip magazine because all the pictures and exclusives are about the celebrity world . ...read more.

In my opinion this magazine is of very good quality . You find out just from the front cover that it is all about the celebrity gossip and what is happening in the fashion world and it's a very appealing magazine to its target audience . I think that the pictures and the language have the same amount of impact because without the pictures the words wouldn't mean anything and vice versa but on the other hand I do think the words do give it that lively edge . I think the front cover is very effective because of all the colours used because they are very bright and eye catching and I think this helps to sell this magazine and also by using very smart puns. Finally I think you can judge its magazine by its cover because you can tell you what is going to be inside and if so is it the stories you want to read. I found my first real excuse to read a girly magazine and I wish I could use it again. ?? ?? ?? ?? ...read more.