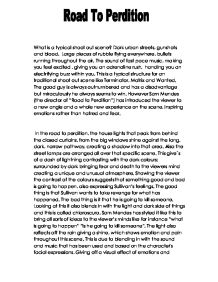 Road to Perdition film review. Sam Mendes (the director of Road to Perdition) has introduced the viewer to a new angle and a whole new experience on the scene, inspiring emotions rather than hatred and fear.

What is a typical shoot out scene? Dark urban streets, gunshots and blood. Large pieces of rubble flying everywhere, bullets running throughout the air. The sound of fast pace music, making you feel excited , giving you an adrenaline rush, handing you an electrifying buzz within you. This is a typical structure for an traditional shoot out scene like Terminator, Matrix and Wanted. The good guy is always outnumbered and has a disadvantage but miraculously he always seems to win. However Sam Mendes (the director of "Road to Perdition") has introduced the viewer to a new angle and a whole new experience on the scene, inspiring emotions rather than hatred and fear. In the road to perdition, the house lights that peak from behind the closed curtains, from the big windows shine against the long, dark, narrow pathway, creating a shadow into that area. Also the street lamps are arranged all over that specific scene. This give`s of a dash of lightning contrasting with the dark colours; surrounded by dark bringing fear and death to the viewers mind creating a unique and unusual atmosphere. Showing the viewer the contrast of the colours suggests that something good and bad is going to happen, also expressing Sullivan's feelings. ...read more.

Also when there's an extreme close up on things you can always see the contrast with the other things. Thirdly there are many props used light tall lights, terrace houses on both sides and this is to create an atmosphere and make the characters stand out within the area. Sam Mendes has used different camera shot, angles and movement particularly in the scene. For instance the specific one`s that have been used are dolly shot, long shot, mid shot tilt and over the shoulder shot. He has used a lot of these techniques and this to create an effect and make it interesting to grab the viewer's attention and make them feel like as if they are behind the scenes. Certain types of shots have been used; this it to make it interesting and to add effect like the part where they do a close up on Rooney's face. Also there is a unusual composition of shots within the scene, like when the camera is focused on Rooney and his guards, you'll see his guards getting shot one by one but you'll always see Rooney within that frame and this technique is "pan" but this pan has been used slowly to show pain and revenge within the guards that have been shot. ...read more.

Looking at it from this point of view it makes u feel charged up giving you an electrifying jolt to your heart making you feel excited. Sam Mendes has truly explored the conflicting themes of hatred and fear and has completely created a new perspective to a shootout scene. Looking at this scene it makes the viewer feel contemplative about life and puts you in the position of the good guy. Comparing it to a traditional shoot out scene, it is always jammed packed with action, fighting and fast pace music rarely giving you time to catch your breath, but with "Road to Perdition" it is more tragedy, emotional and calm. Also this particular scene has blended really well with the rest of the film and has filled it up like cement when used with bricks. However my thoughts are that I still prefer traditional shoot out scene because all of the techniques that are used charges the viewer up for instance like the music that is being played, the sounds that are used, the way it has been shot. But at times people do prefer a little bit of change. My opinion would be to go with a subverted traditional shoot out scene. Shehzad siddique ...read more.