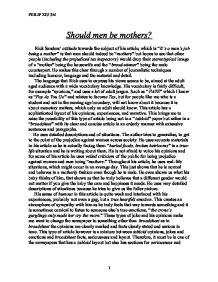 Should men be mothers?

Should men be mothers? Rick Sanders' attitude towards the subject of his article, which is "It's a man's job being a mother" is that men should indeed be "mothers" but hopes to see that other people (including the prejudiced tax inspectors) would drop their stereotypical image of a "mother" being the housewife and the "bread-winner" being the male counterpart. He makes this clear through a number of journalistic techniques including humour, language and the material and detail. The language that Rick uses to express his views seems to be, aimed at the adult aged audience with a wide vocabulary knowledge. His vocabulary is fairly difficult, for example "spurious," and uses a lot of adult jargon. ...read more.

He is not afraid to voice his opinions and for some of his article he uses veiled criticism of the public for being prejudice against women and men being "mothers." Throughout his article, he uses real-life situations, which might occur in an average day. This just shows that he is normal and behaves in a motherly fashion even though he is male. He even shows us what his baby thinks of him, that shows us that he truly believes that a different gender would not matter if you give the baby the care and happiness it needs. He uses very detailed descriptions of situations because he tries to give us the fuller picture. ...read more.

One of the best examples I can think of is the Daily Mail. With its in-between of tabloidnism and broadsheetedism. His tone of voice in most cases is one of that of anger interlaced with fun but in the last paragraph, his tone of voice is one of disbelief and anger. He makes his attitude clear, because of his use of good essay techniques. His experiences really come alive, because he had described it accurately and interestingly with true heartfelt emotion. He also seems to vary the style of his article, he fluctuates his sentences from short bursts to long and complicated sentences, he also varies the structure of his article, he sometimes switches from dialogue to description, and he uses a lot of different vocabulary. 650 Words Created by Philip Xiu 3M PHILIP XIU 3M 1 ...read more.