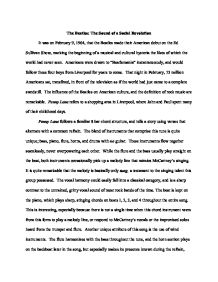 The Beatles: The Sound of a Social Revolution

The Beatles: The Sound of a Social Revolution It was on February 9, 1964, that the Beatles made their American debut on the Ed Sullivan Show, marking the beginning of a musical and cultural hysteria the likes of which the world had never seen. Americans were drawn to "Beatlemania" instantaneously, and would follow these four boys from Liverpool for years to come. That night in February, 73 million Americans sat, transfixed, in front of the television as if the world had just came to a complete standstill. The influence of the Beatles on American culture, and the definition of rock music are remarkable. Penny Lane refers to a shopping area in Liverpool, where John and Paul spent many of their childhood days. ...read more.

This is interesting, especially because there is not a single time when this chord instrument veers from this form to play a melody line, or respond to McCartney's vocals or the improvised solos heard from the trumpet and flute. Another unique attribute of this song is the use of wind instruments. The flute harmonizes with the bass throughout the tune, and the horn section plays on the backbeat later in the song, but especially makes its presence known during the refrain, where the flute and trumpet call and respond to each other with impressive improvised solos. The drum line of the song is simple, mostly emphasizing the backbeat with snare or hi-hat hits. All of these elements give the song a light, almost buoyant feeling, as if the song just floats through the air. ...read more.

They used LSD in almost religious way, recognizing the need for change at all levels of society. Hunter S. Thompson best describes the feeling of the acid scene: "There was a fantastic universal sense that whatever we were doing was right, that we were winning...And that, I think, was the handle-that sense of inevitable victory over the forces of Old and Evil. Not in any mean or military sense; we didn't need that. Our energy would simply prevail. There was no point in fighting-on our side or theirs. We had all the momentum; we were riding the crest of a high and beautiful wave." Lee, Martin A., & Schlain, Bruce. Acid Dreams: The Complete Social History of LSD. Grove Press. New York. 1985 ...read more.